When it comes to off-roading, the 2016 Jeep Wrangler Unlimited is taking up the mantle of the Best 4x4 of the Decade, an award was given by Four Wheeler Magazine. This Jeep has a limited number of true competitors. The 2016 Mercedes-Benz G550 is the most expensive. 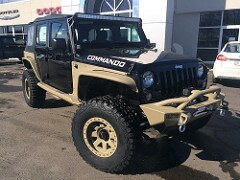 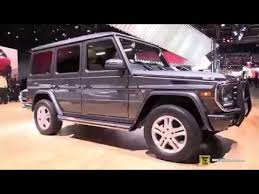 While the G500 emerged as a luxury off-roader about 27 years ago, the Wrangler has been rolling for 75 years. The two look very similar, but there is one striking difference: the Wrangler line is the only SUV to offer an open-air ride. Two soft-top choices and a hardtop are available on the Wrangler Unlimited. These can be removed for the ultimate convertible ride. The ability to take off the doors or fold the windshield turns this fun Jeep into something akin to the world's toughest dune buggy. You can roll down the windows on the G550, but that outdoor feeling is much more real in the Wrangler Unlimited.

Both SUVs have skid plates to protect the fuel tank and other vital organs of the engine. With extra welding and thorough reinforcement, they are both built to withstand punishment. Jeep utilizes Heavy Duty Dana 44 axles to ensure that the Wrangler doesn't break under pressure. Both SUVs have four-wheel drivetrains that are made to crawl over the rockiest terrains. Smart engine features include low-rev torque to give the power necessary for tough climbs. The Wrangler Unlimited 4x4's can claim best-in-class 4x4 capability and best-in-class snow capability.

According to Edmunds, the G550 is built on an antiquated platform with questionable practicality. On the other hand, the auto critic writes that the Wrangler Unlimited has old-school mechanical underpinnings that make it oddly fun to drive on the road. In addition, the Wrangler Unlimited's turning circle is smaller. It measures 12.4 meters. The G550 has a turning circle of 13.6 meters. On the trail, every centimeter counts. The Jeep also has significant advantages in terms of weight and ground clearance.

Despite all of the armor that both off-roaders have, ground clearance is critical to preventing damage and ensuring greater success over rough surfaces. Off-road vehicles need to be tall with few overhangs to make them safe on the trail. Although built trim like the Wrangler Unlimited, the G550 falls short on ground clearance. It claims 20 centimeters, while the Wrangler Unlimited can claim 21.1, 24.4, 24.6, or 25.4 centimeters, depending on the model. That can make a big difference when fording a stream or driving over rough surfaces on the trail.

Weight makes a difference, too. The Wrangler Unlimited weighs 1,768 kilograms. The Mercedes-Benz weighs 2,691 kilograms. That's quite a difference when navigating a bumpy trail or just hauling it down the highway. A bigger weight requires more energy to move and maneuver. This explains why the Wrangler Unlimited can do plenty with a 285-horsepower engine, and the G550 requires one with more horsepower to do the same off-roading tasks.

Both the G550 and the Wrangler Unlimited are designed for five passengers. While the G550 has an overly luxurious cabin, it lacks a really basic commodity. According to Edmunds, the G550's large exterior doesn't translate into good legroom. It is modest at every seat, writes the critic. This smaller-than-it-should-be problem also applies to the storage and cargo space. This includes flimsy cup holders that plug into designated spots on the center console and dash. Wider items don't fit comfortably in the rear cargo space due to the left and right humps. It has 660 litres of space compared to the Wrangler Unlimited with 892 litres. The Wrangler Unlimited's passenger volume is 2,945 litres, which is sufficiently large for a midsize SUV.

The Wrangler Unlimited may not be the luxury ride that the G550 claims to be, but it definitely isn't the bare-bones Jeep of yesteryear. Leather seats are a favorite option. Heated front seats and illuminated cup holders add a civilized touch. The UConnect technology is tops in its class.

With much to offer on the road and on the trail, the 2016 Jeep Wrangler Unlimited is definitely ready to take on the 2016 Mercedes-Benz G550.