When it's time to shop for a new pickup truck, two of the most popular choices are the 2016 Ram 1500 and the 2016 Ford F-150. At first glance, these two vehicles appear to be very similar, but when you take a closer look, you'll find many differences that make the Ram 1500 the best choice, whether you want a daily driver or a work truck.

At CarHub, we've noticed most pickup buyers are looking for a truck that will handle tough jobs, and that's one of the strengths of the Ram 1500. Its 3.6-litre Pentastar V-6 engine generates 305 horsepower and 269 lb.-ft. of torque, which is more than the 282 horsepower and 253 lb.-ft. of torque produced by the 3.5-litre V-6 block in the Ford F-150. This makes even the base models of the Ram 1500 true workhorses.

Here's something else you won't find on the Ford F-150. The Ram 1500 can be outfitted with an optional 3.0-litre Ecodiesel V-6 engine that cranks out 420 lb.-ft. of torque while helping to conserve fuel. We know that some people believe that diesel engines don't run clean, but it's a fact that the Ram 1500's advanced emissions control system helps it to run extremely clean.

Here's what Left Lane News wrote about the Ecodiesel V-6:

"Already gifted with capable handling and handsome interiors, the Ram 1500 lineup is now even more unique and appealing with the addition of the EcoDiesel option…its combination of low-end torque and efficiency will undoubtedly win over many hearts and wallets. We expect Ram will have little problem achieving its goal of a 15 percent take rate for the EcoDiesel."

Both engines for the 2016 Ram 1500 are mated to a Torqueflite eight-speed transmission that optimizes fuel economy and provides smoother gear changes than the six-speed automatic that's standard on the Ford F-150. When there are more gears, the engine can work in its optimum range, making for a better driving experience. Transitions are fluid, making for a smooth ride. A thermal management system also helps increase long-term reliability.

Grille shutters open and close automatically to manage the Ram 1500's engine cooling requirements and aerodynamics. When the truck drives at highway speeds, the shutters close to boost efficiency, which translates into fewer fuel stops in the city and on long trips. 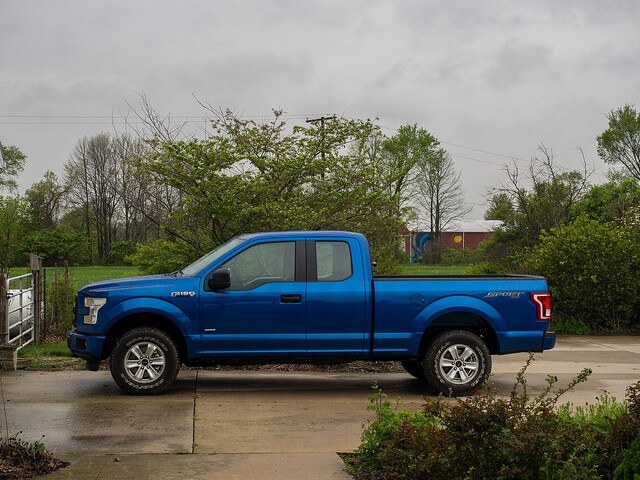 We all know that towing is one of the major jobs for pickups, and this is another area where the Ram 1500 excels. Its maximum towing capacity outdoes the capacity of the Ford F-150. This means Ram 1500 owners can take on the toughest jobs or haul some large toys on your next weekend outing.

Ram 1500 owners can take advantage of automatic load leveling, thanks to an air suspension. This feature helps when pulling a large trailer or when loading heavy objects in the payload. The system can be adjusted manually by the driver, attaining the best ground clearance for the situation. When the truck reaches highway speeds, it lowers automatically to provide greater aerodynamics. The Ford F-150 doesn't offer this feature.

Available locking side-storage compartments offer Ram 1500 drivers a convenient place to put tools, drinks or anything else they need to stow. It's even big enough to fit some shovels and yard tools, while keeping them safe from theft. Ford F-150 owners don't enjoy this convenience.

While the 2016 Ram 1500 and the 2016 Ford F-150 are available with roomy cabs and numerous luxury upgrades, the Ram 1500 offers some benefits that make a big difference at the end of the working day. Instead of a traditional gear selector, the truck has a rotary shifter that's big enough to be used while the driver is wearing gloves. The driver simply turns a dial to easily switch from park to drive or reverse. The infotainment screen on the Ram is larger than many others, and the system itself is more user-friendly, making it more pleasant to use every day.

Now that you've had a chance to learn how the 2016 Ram 1500 compares to the Ford F-150, it's time to see for yourself the advantages the 1500 brings to the table. Schedule a test drive at Ram dealer Toronto, or check our Ram 1500 inventory on our website.