Full-size trucks are incredibly popular with buyers right now, so it's not surprising that we're getting pretty much spoiled when it comes to choice these days. If you're shopping for a new full-size pickup but you don't quite need a heavy duty model, the 2016 Ram 1500 and the 2016 Toyota Tundra are likely to be high up on your list of ones to consider.

Ram trucks come with a great reputation and they have stronger residual values than many of their rivals, but Toyota trucks like the Tundra are also extremely well regarded. To help you if you are trying to decide which is best for you, here we put the Ram 1500 and Toyota Tundra up against each other to see which comes out on top.

Styling
Ram trucks are pretty unmistakable with their Freightliner exterior styling that's as aerodynamic as it is attractive. Every trim level gets its own grille design, which is a nice touch that perhaps more manufacturers should adopt. Some are a traditional chrome style while others go with a modern, no-nonsense black-coated look.

The Ram's cabins range from the simple, workmanlike Tradesman to the unadulterated luxury of the Laramie Longhorn, which features some of the highest quality wood grain and contrast stitching available in a vehicle of this kind. The upper trim levels are particularly nice places to be, especially when it comes to those long tows. 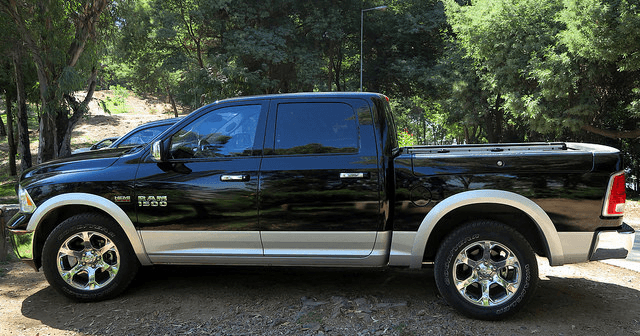 The Tundra certainly doesn't look out of place as a full-size truck on Canadian roads, whereas other Japanese trucks can look distinctly, well, Japanese. There's no mistaking that this is a truck that has been designed and developed especially for North America, but there are just some of its bits and pieces that don't quite deliver the same clean, chiseled look you get with the Ram.

The inside of the Tundra has the same familiar large knobs and controls that so many trucks go with, and it has to be said that the Toyota's cabin is neat and comfortable. However, although the high-end trims are impressive, lower trim levels don't offer the same degree of comfort and quality you get with their Ram equivalents.

Engines
Obviously engines are an important consideration whatever vehicle you're looking to buy, but they're especially important when it comes to full-size trucks as they're often called upon to carry out some pretty heavy work.

The 2016 Toyota Tundra has two V-8 engines on offer: a 4.6 and a 5.7-litre that develop 310 horsepower and 327 lb.-ft. and 381 horsepower and 401 lb.-ft., respectively. Unfortunately, the Tundra doesn't offer the range of engines you get to choose from with the Ram 1500. The Toyota's V-8s are both pretty good, but the lack of variation means this is a department where the Ram is a clear winner.

Capability
There are so many different configurations available with both these trucks that you could just about write a book of statistics when it comes to towing and hauling capabilities. Although the Tundra can be specified in a way to make it very capable, you can always find a Ram 1500 that will cope with a little bit more.

The most you can tow with a Ram 1500 is 4,817 kg, whereas the highest towing capacity for any Tundra is 4,625 kg. When it comes to payload capacity, the most weight you can haul with the Toyota is 830 kg, which is 27 kg less than the 857 kg the Ram can deal with when properly configured.

What might be more surprising is that when it comes to comparing the two 5.7-litre V-8s, the Ram has a big advantage there as well. The best the Toyota 5.7-litre can manage is 18.2 and 14.1 L/100km in the city and on the highway, respectively, which makes the 1500's 5.7-litre V-8 look pretty frugal. Official figures for the Ram say you can get 15.8 L/100km in the city and 10.9 L/100km on the highway with its most powerful engine, and that's an awful lot more economical than the Tundra.

Conclusion
The 2016 Toyota Tundra isn't a bad truck by any means, but it does look to be a little out of its depth when it's put up against the 2016 Ram 1500. The Toyota does everything pretty well and it doesn't have any serious failings, it's just that the Ram does everything better and some things considerably better.

When equipped with the 3.0-litre EcoDiesel V-6, the Ram 1500 is the industry's only diesel-powered half-ton pickup as well as being the most fuel-efficient pickup in Canada. It dominated both the 2014 and 2016 Canadian Truck King Challenges, where it saw strong competition from the likes of the Ford F-150 and Chevy Silverado.

Now you've seen what an outstanding truck the 2016 Ram 1500 is and how it beats its Toyota rival hands-down, check out our website to see our current inventory of Rams and give us a call to arrange a test drive in this fabulous full-size pickup.