When we're looking at buying a new vehicle, not everyone has a clearly stated list of criteria pointing to one specific segment of the market. Some buyers might not necessarily need anything bigger and more practical than a two-seat roadster, but they still sometimes end up going for a full-size SUV with more seats than they might have friends to fill them. That's obviously an extreme example, but the 2017 Dodge Journey and 2017 Chevrolet Traverse are both crossovers that are still quite different from each other, so let's see how they compare for prospective buyers.

The Dodge Journey has been around a good while now, and its styling has remained pretty much unchanged. Although it's technically a mid-size crossover SUV, the Journey is really a minivan without sliding doors. Having said that, the rugged styling is a lot more attractive and desirable than a true minivan, which could be one of the reasons for its longevity. The angles and creases are out of step with the more curvy nature of the latest crossovers, but for some buyers, that difference only adds to its appeal.

There's nothing wrong or offensive with the way the Chevrolet Traverse looks, it's just not very exciting or even interesting. It blends into the background of homogenous crossover designs of recent times, so we'll have to give this section to the Journey for its individuality.

Unlike most minivans, the Journey crossover is available with two different engines. The base engine is a 2.4-litre 173 horsepower and 166 lb.-ft. inline-four that comes mated to an automatic transmission. If you are going to fully load your Dodge Journey on a regular basis, you'll probably want to go for the 3.6-litre Pentastar V-6 that ups the power ante to 283 horsepower and 260 lb.-ft. Front-wheel drive is standard, but all-wheel drive is available.

There's no four-cylinder option with the Traverse, so all models of the crossover SUV get the 3.6-litre V-6, which means 281 horsepower and 266 lb.-ft. of torque. It does need all that power though, as the Traverse is close to 450 kg heavier than the Dodge. As the Dodge is lighter, has more power and a choice of engines, this is another win for the Journey. 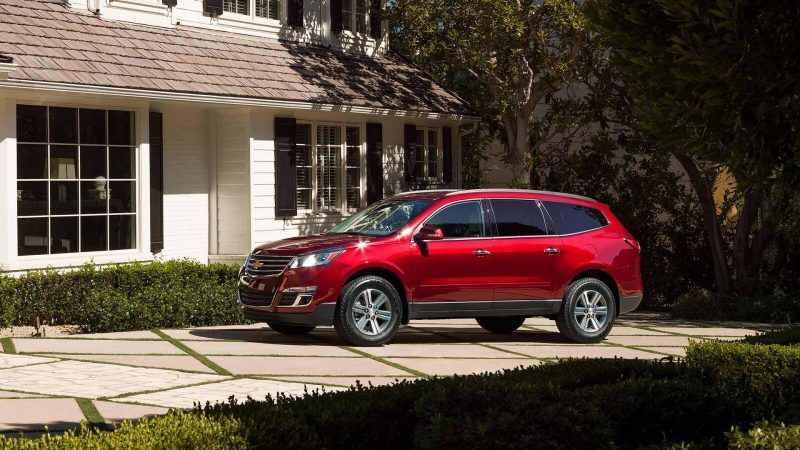 In its base form, the Dodge Journey is a five-seat model, but there's an available third row to take the seating capacity up to seven. The third-row seats are not really for adults, and there's no mistaking the family-friendly nature of the cabin as it's not fitted out with any materials you'll be scared to let those little ones loose on. There's all the storage and cubbies you could wish for, but you can't avoid the obvious message that this is a model aimed more towards those buying on a budget.

Up to eight people can be accommodated inside the Traverse, so the Chevy is as close to a minivan as you can get for practicality without actually looking like or being a minivan. Once again, the materials and comfort are a long way short of luxury, but there's a more premium feel to the Traverse than there is with the Journey, so this is a win for the Chevy.

Despite on the face of it looking like very different vehicles, the Journey and the Traverse have a lot in common. The Traverse is bigger and more spacious than the Journey, but like most things in life, having more also means paying more. The Dodge is much less expensive than the Chevy, and as there's not enough about the Traverse to justify such a considerably higher price, we'll name the Journey as our winner here.

To find out more about the 2017 Dodge Journey and to try it out for yourself, don't hesitate to get in touch with us today here at CarHub.