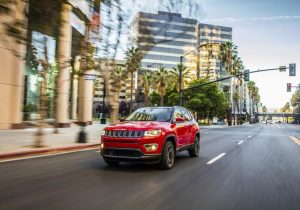 The compact SUV segment is pretty fast moving at the moment, with refreshed and all-new models appearing on a very regular basis. Competition is therefore becoming increasingly fierce, and it does mean all-new models have an advantage as people tend to gravitate to things that are new and shiny and different from what is already around. So, let's take a look at two contenders that are brand new by comparing the 2017 all-new Jeep Compass and the 2017 Honda HR-V with each other.

Whether buyers will admit it or not, most people choose crossovers for the way they look, so the exterior styling is incredibly important. In some ways Jeep has been fairly safe by adopting something of a "baby" Grand Cherokee look for the new Jeep Compass. The new model is sharp, stylish, sporty, aggressive and pretty cool, so the rest of the segment has something to worry about with the new Jeep.

The styling of the Honda HR-V is pretty conservative, and it's probably more like a tall hatch than a crossover. It's not as distinctive or divisive as the larger CR-V, but it's not as interesting either. The HR-V's stubby nose does borrow the CR-V's grille and headlamps, but it's not enough to make it a rival for the all-new Compass in the style stakes.

There's just a single engine on offer in the all-new 2017 Jeep Compass, although it can be mated to three different transmissions. The engine in question is a 2.4-liter four-cylinder that is rated at 180 horsepower and 175 lb.-ft. of torque. It's a fairly big and powerful engine for its class, and it copes with both on and off-road duties very well. Although there is an element of body lean, which isn't unusual for a vehicle of this type, the new Compass feels checked and confident when thrown around a curvy road, and safe and planted when the tarmac runs out.

The Honda also features a single four-cylinder engine in its lineup, which in this case is a 1.8-litre unit developing 141 horsepower and 127 lb.-ft. of torque. It sends the power to the front or all four wheels through either a six-speed manual or a CVT transmission. Although a little underpowered, the HR-V is good around town and on the highway, but the all-wheel drive system is a simple automatic system requiring no intervention from the driver, so we see the Compass as the better performer by some measure. 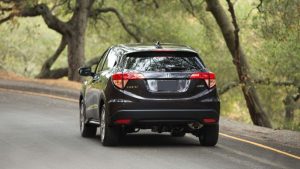 The Honda HR-V is a decent enough little crossover that drives and handles well in the urban jungle and returns some impressive fuel economy ratings. But at the side of the all-new Jeep Compass, the Honda appears more than a little safe and possibly even mundane. The Jeep looks edgier and more aggressive, and its off-road capability makes it a whole lot more fun than the Honda and easily the better choice between these two.

The all-new 2017 Jeep Compass is available now from us here at CarHub, so get in touch now for more information and to arrange a test drive in this sensational new crossover.