A Brief History of the Jeep Cherokee

Home » A Brief History of the Jeep Cherokee

A Brief History of the Jeep Cherokee 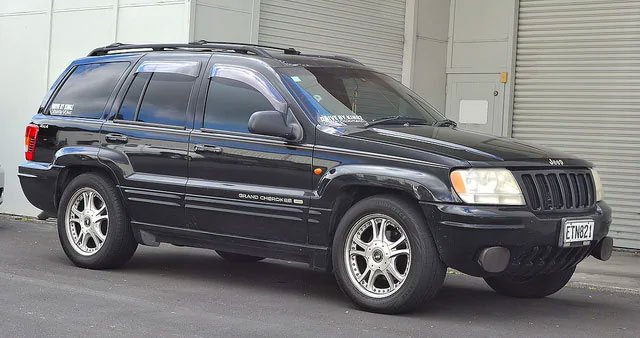 The Jeep Cherokee has come a long way from its early days. The changes have been more than sheet metal deep as the SUV has evolved from a two-door runabout to a comfortable family crossover.

During the 1960s and 1970s, Jeep had a model called the Waggoneer that was successful as a more luxury-minded Jeep. It appealed to executives and families because it had more amenities than the average Jeep, but it could still ride the trail. In 1974, Jeep introduced the Cherokee as a less-expensive, two-door version of its popular Waggoneer. A few years later, Jeep expanded the Cherokee line-up to include an equally sparse four-door edition.

About ten years later, Jeep decided to change designs and let the Cherokee stand on its own four wheels. The new Cherokee dropped more than 3,000 pounds (about 1,361 kg), making it more versatile than the original Waggoneer-like model. Much shorter than before, it had a smaller turning circle, which was an advantage in a crowded parking lot and on the trail. There were two-door, four-door, and Comanche truck editions. The Cherokee's interior was still very basic in terms of creature comforts. There were three models including the sporty Chief and the more luxurious Pioneer.

The Cherokee had a powerful engine and, of course, off-roading prowess. The 2.5-litre four-cylinder engine was mated to a four-speed manual. A six-cylinder edition added much more horsepower and came with a three-speed automatic. There was even a diesel engine for a few years. The Cherokee's four-speed automatic came along in 1987, adding modern electronic controls. Ahead of its time, this system also allowed the driver to pick a power or comfort mode.

This edition would last from 1984 to 1996, but there were some significant changes during those years. Jeep introduced the coil link suspension. This gave the Cherokee its superior wheel travel. It also allowed the Cherokee to maintain its good ground clearance even when conditions were rough. The new suspension allowed for better cornering on the road. Passengers enjoyed a better ride quality. The Wrangler now sports a later version of the coil link suspension that got its start here.

The 1990s saw the addition of an electronically-tuned radio and three-point rear seatbelts, but the real changes came in 1997. Style changes were highlighted by new sheet metal and a new grille with an air dam. The front doors no longer had a second window pane. The interior got new seats and new door trim panels. Although it seems mild now, the big excitement was over the electronic instrument panel that had a microprocessor. The outside mirrors offered power-defrost and power-adjustments for the first time.

In 2001, the Cherokee nameplate was retired. The Jeep Liberty took up where the Cherokee left off. Then, in 2014, Jeep brought the Cherokee name out of retirement for what would become one of its most successful new products. The Cherokee of today is still a five-person SUV with an excellent off-roading capability. Yet it has many traits not found in its long history. There is no longer a bare-bones Cherokee.

The newest generation of Jeep Cherokees has more in common with the Grand Cherokee than its ancestors. Material quality, style and features are all top-notch for the class. The 2014 Jeep Cherokee made it to the number one spot in the rankings for compact crossovers as compiled by U.S. News and World Report.

The Cherokee is built on a special automotive platform developed by Fiat-Chrysler. Like the original Cherokees in 1974, it is manufactured at a plant in Toledo, Ohio. Despite the fact that it is longer than the Liberty/Cherokee that it replaced, it is more fuel efficient. These new Cherokees earn 31 mpg (about 9 L/100km) on the highway, a healthy fuel economy for an SUV. The standard engine is a Tigershark I4. A class exclusive, the nine-speed ZF automatic transmission ensures some really sharp shifting. The Pentastar V6 offers more horsepower and torque with a top towing capacity of 4,500 pounds (about 2,041 kg).

Sport, the base edition, comes loaded with the UConnect 5-inch touch screen and other amenities. The Latitude edition changes the look with special accents and adds more features. The Limited goes in a luxurious direction. This one has leather seats, the UConnect 8.4-inch screen, heated front seats, and push button start. Other options include the dressy Altitude edition and a 75th Anniversary special edition. The 2016 lineup adds the Overland edition. This top edition is so well-appointed that drivers may mistake its interior for the Grand Cherokee's cabin.

The most capable 4x4 drivetrain belongs to the Cherokee Trailhawk. Yet the other editions can also have four-wheel drive. In fact, the Cherokee is the only compact SUV to offer three versions to suit different driver preferences. These part-time systems have the Selec-Terrain dial to reduce the chances of getting stuck in mud or snow. These systems also have a disconnecting rear axle, which helps reduce fuel consumption when four-wheel drive isn't in use.

The latest generation of the Jeep Cherokee has brought new consumers to the brand. It appeals to comfort-seeking families, status-minded singles, and adventure-seeking shoppers all at the same time. Clearly the well-appointed Cherokee has come a long way from its two-door, functional-but-basic beginnings.

Experience the evolved Jeep Cherokee for yourself at Caledon Chrysler.