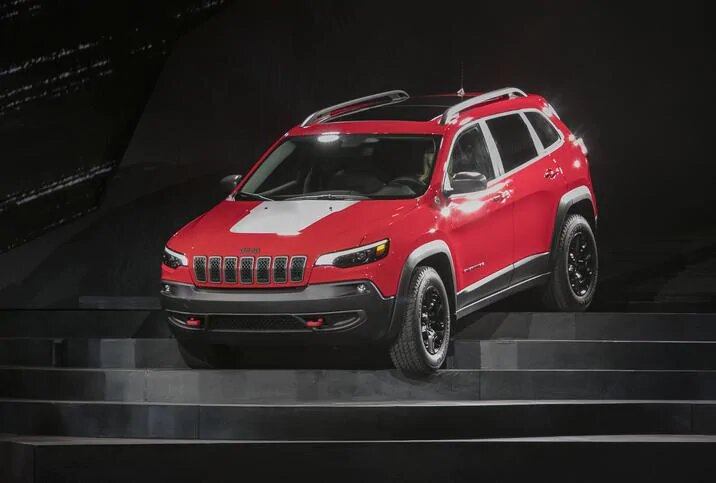 The new 2019 Jeep Cherokee has recently been unveiled at the Detroit Auto Show, and although it's not a new-generation of the popular Jeep model there are plenty of enhancements for the new model year to continue to attract new buyers. Among the changes are a new more universally appealing exterior design and a new engine, so let's take a look in a little more detail.

It's going to be the new front fascia of the Jeep Cherokee that's going to get the most attention, and rightly so. The three-tiered layout of yesteryear has now been rearranged so the look that used to see the lights/turn signals on top, the headlights in the middle, and fog lights at the bottom is no more. In its place comes a more conventional, and some may say conservative design, which now integrates the headlights, turn signals, and running lights into one single cohesive unit. Although a little of the Cherokee's uniqueness may have been lost, this is definitely a more widely appealing look. It also represents a sizeable move towards integrating the Cherokee into the current Jeep lineup, bringing it more in-line with bigger and smaller Jeep SUVs, while at the same time broadening the Cherokee's visual appeal.

It probably won't surprise anyone that the 2.4-litre base engine and the optional 3.2-litre V-6 engine from last year remains in place. After all, this is a mid-cycle refresh and not a complete redesign. However, a new 2.0-liter unit is being added to the family that will deliver almost as much power as the V-6, but with the added bonus of greater fuel-efficiency. The new engine develops 270 horsepower, compared to the V-6's 271 horses, but it ups the ante on torque from the V-6's 239 lb.-ft. to a much more impressive 295 lb.-ft. Of course, it does beg the question of how long the V-6 has left as it's starting to look a little redundant with the introduction of the new turbo unit. 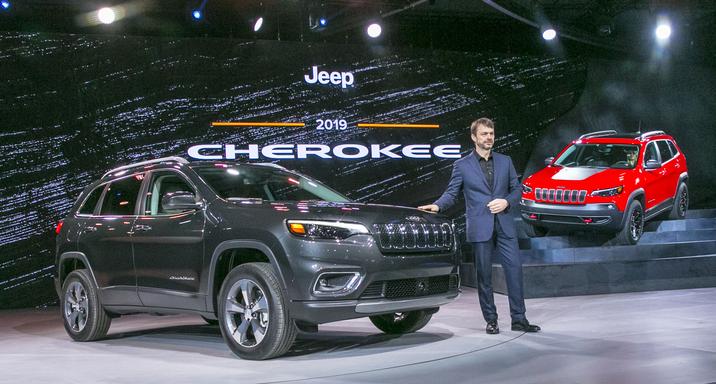 An updated interior is another feature of the 2019 Jeep Cherokee, which delivers a fresh and elegant ambience while remaining as practical and comfortable in an environment as it always was. A new, more driver-oriented cockpit loaded with easy-to-use, useful technology is a big feature of the refreshed Cherokee, which also now boasts clever, thoughtful storage features and more than 80 available safety and security features. There's also a more upscale feel to the cabin this time around, which is accentuated by premium materials through the door panels, armrests and upper instrument panel, and the soft-touch interior trim that's pleasing to the eye and features throughout the interior.

Despite being even better on the road, the new Cherokee is still one of the most capable models in its class when it comes to the off-road environment. The new model offers a choice of three innovative four-wheel drive systems, which have been enhanced for unmatched off-road capability and the ability to cope with all weather conditions. The Jeep Cherokee remains the benchmark for mid-size SUVs, thanks to rear-axle disconnect technology delivering reduced energy loss when four-wheel drive capability isn't required, while at the same time improving fuel efficiency. The rear-axle disconnect system switches effortlessly and seamlessly between two- and four-wheel drive for full-time torque management with no requirement for input from the driver.

For more details on pricing and availability of the 2019 Jeep Cherokee and to be at the front of the line for a test drive, don't hesitate to get in touch with us here at Caledon Chrysler Dodge Jeep Ram.