The Chrysler Pacifica Hellcat Is Coming

The Chrysler Pacifica Hellcat Is Coming

The year was 2015. The writing was on the wall for big, powerful engines. In a few years the automotive industry would have to call time on its love affair with gasoline, pistons and superchargers. Smaller motors would come first before the move to all-electric powertrains silenced the howl of internal combustion on our roadways forever. Many large car companies saw this and began the transition of their own accord. There was one company, however, that would not go quietly, would not accept the inevitable but would go down swinging in a tsunami of noise and tire smoke. That company was Dodge, and the engine they chose to make the final explosive stand for internal combustion was the 707-horsepower supercharged and fire-breathing 6.2 litre Hemi V8. The automotive world was blessed with a new hero, and its name was Hellcat.

The first vehicles to appear with Hellcat power were of course the Charger and Challenger siblings which were immediately hailed for combining enormous power with factory warranties and the ability to vaporise a set of rear tires faster than just about anything else on the planet. This was the very antithesis of the downsizing movement and the public loved it. One day we won't be able to buy cars with internal combustion engines, so why not have the most fun possible while we still can?

It wasn't long before the "Hellcat everything" movement began to gather steam with enthusiasts calling on Dodge to drop the mighty V8 into other vehicles in the Fiat-Chrysler stable. Dodge was happy to oblige with the first recipient being the 5400-lb. Jeep Grand Cherokee Trackhawk. Next came the Ram Rebel TRX, pronounced T-Rex because what's bigger and badder than a Raptor? No twin-turbo V6es here, just a monster V8 with a supercharger larger than most economy cars' entire engines bolted to it. Finally Dodge gave the world the 710-horsepower Durango SRT Hellcat in 2021, while horsepower in the Charger/Challenger twins climbed to 797 with the SRT Hellcat Redeye editions.

There was one vehicle, however, that Dodge's maverick engineers said just couldn't handle the now-legendary Hellcat V8: the Chrysler Pacifica. Despite being egged on by an army of fans who would likely try to Hellcat grandma's mobility scooter if they could, Dodge refused to shoe-horn the engine into the comfortable, practical and front-wheel drive Pacifica. It would require too many modifications to the shell meaning they'd have to charge a higher price and all jokes aside how much of a market could there really be for a Hellcat minivan? "Okay," said the fans, "We love you anyway."

That seemed to be that, until one Mr. Freddy "Tavarish" Hernandez decided to take on the challenge and build the world's first minivan powered by the 6.2 litre supercharged Hellcat V8. 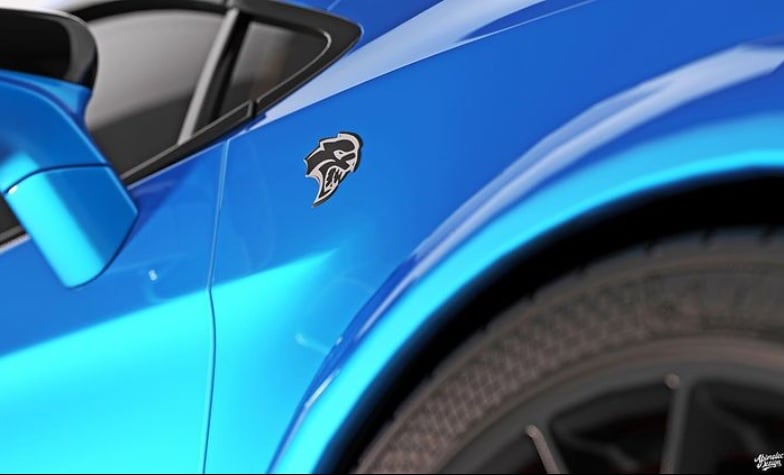 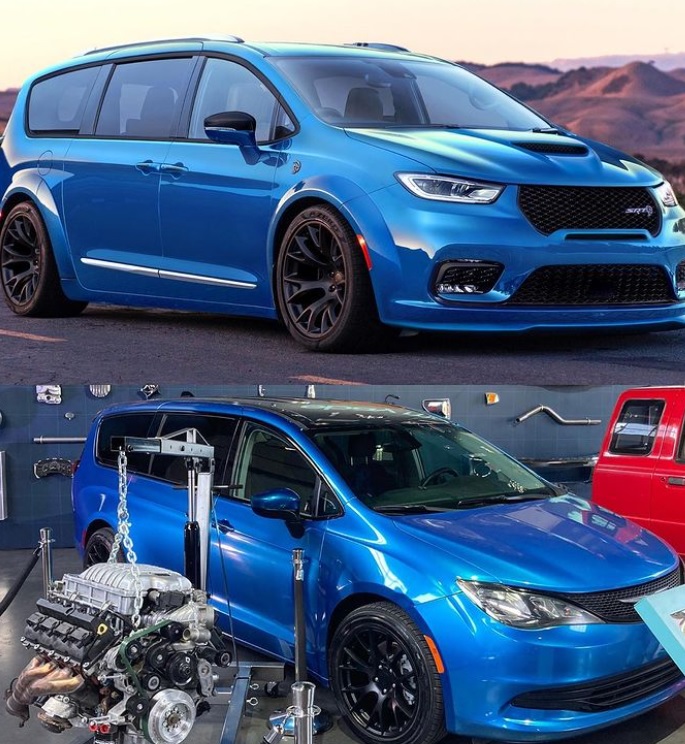 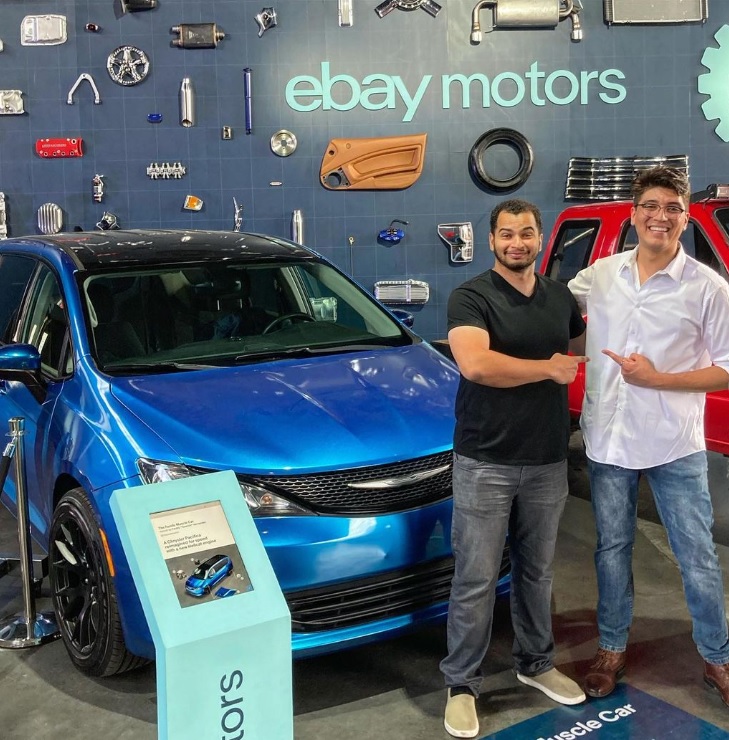 Tavarish is known for his YouTube channel where he buys damaged luxury and supercars before restoring and resurrecting them. He's certainly got the skills to make a 700+ horsepower minivan happen and was inspired when he saw a Hellcat Pacifica rendering by Abimelec Arellano (@abimelecdesign) on Instagram. Freddy's reportedly a fan of the Pacifica for its space, reliability and affordability. What better way to celebrate that than by putting many hundreds of horsepower through its front wheels?

Power is nothing without control, as the old adage goes, so the Hell-cifica will receive a slew of additional mods to give it a fighting chance of keeping up with the power under its hood. There'll be new fender flares for a wider track and increased stability while a set of bronze Hellcat wheels will be shod in sticky performance rubber. Brembo brake calipers and rotors will rein everything in while a new hood scoop will feed air to the Hellcat's supercharger.

Lowered suspension will further improve handling while a new aero package in the form of a front apron, rear diffuser and roof-mounted spoiler will keep the van firmly on the ground. The Hellcat lurking beneath the hood will breathe through a new and bespoke centre-exit exhaust system and should sound just as mean as it looks.

The one-off vehicle will be built at the extremely swanky Classic Car Club Manhattan and is scheduled to debut at this year's SEMA show which runs from November 1st-4th in Las Vegas.

Got questions? We've got answers.

How much does a Chrysler Pacifica Hellcat cost?

Hard to say, as it's such a unique one-off. You could buy a brand new Pacifica and spend about $20,000 on a Hellcat crate motor alone before any of the other custom bits, but that's not really Tavarish's style. If this was happening without big corporate sponsors we'd bet on a flood or front-end damaged Pacifica and an engine from a rear-damaged Charger/Challenger but if eBay Motors is picking up the tab then the sky's the limit.

It's not known which trim package the donor Pacifica will feature but to be honest they're all good. The entry-level Touring comes equipped with all that space plus a 10.1-inch touchscreen multimedia center while the Touring L adds leather luxury and a 360 degree camera. The Pacifica Limited brings powered sliding doors and liftgate plus wireless device charging and a built-in vacuum system. The Pacifica Pinnacle tops the range with even more luxury as well as a premium 18-speaker sound system and wireless media streaming.

While Hellcat horsepower has climbed as high as 840 in the limited-edition Demon racer our sources indicate that the Hell-cifica will receive one of the newer versions, perhaps from a Redeye donor car, with around 800 horsepower.

We can't wait to see Tavarish's 2022 Chrysler Pacifica Hellcat debut later this year at SEMA as well as the rest of the weird and wonderful vehicles that the show brings out each year. We'll be sure to keep you posted on this build and any others that catch our eye. Until then, happy driving!

James Walker is a car nut and motoring writer with a love of all cars fast and slow. He drives a lot, and has been writing about cars for over five years.

Ask the Seller for a CARFAX Canada Report

What is a CARFAX Canada report?

What does CARFAX Canada tell you?

Why ask for a CARFAX Canada report?

By clicking “Send Email to Seller”, you agree to our terms of use and privacy policy. Your message will be emailed to the poster and not made public.