As far as we're concerned here on the continent of North America, diesel has its place, and that place isn't in executive sedans, compacts or SUVs. However, the amount of torque diesel engines produce for their size makes them just perfect for full-size trucks doing the hard work, and a fantastic example of how great the combination of a diesel engine and a large truck is can be seen with the 2016 Ram 1500 EcoDiesel. 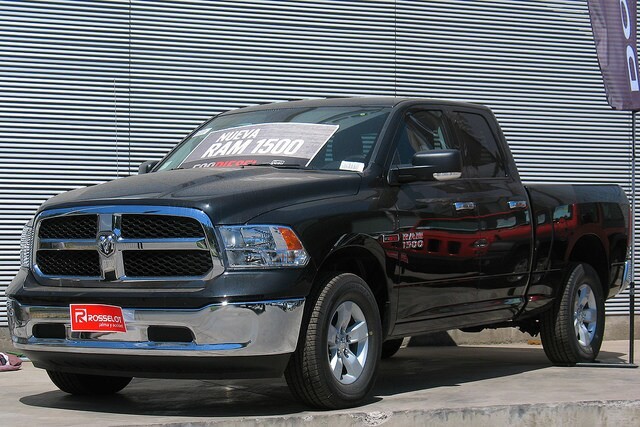 The Ram 1500 EcoDiesel is a firm favourite with Canadian truck buyers, which shouldn't come as too much of a surprise after having been named as Four Wheeler's 2016 Pickup Truck of the Year, as well as the winner of the 2016 Canadian Truck King Challenge.

The 2016 Ram 1500 is Canada's longest lasting and most fuel-efficient line of light-duty pickups with uncompromising strength and class-exclusive suspensions, and the 3.0-litre V-6 EcoDiesel is Canada's only diesel half-ton pickup truck.

The Canadian Truck King Challenge is now in its ninth year, and the annual event is organized by auto writer and truck expert Howard Elmer at a facility in Head Lake, Ontario. Elmer came up with the idea for the event after realizing that, while plenty of other organizations were giving out their "best-of" truck awards, those judges were really only driving the vehicles when they were empty. While it's great that a truck drives and handles well as it stands, there can't be too many people out there that buy a truck like a Ram 1500 and use it for nothing more than the daily commute.

Ok, there are plenty of truck-buyers that drive their trucks empty a lot of the time, but nobody is going to be too happy getting laughed at if their big, bulky and manly truck struggles to cope with a relatively modest load or an average-size trailer.

Elmer says of the Canadian Truck King Challenge, "We drive them the way owners drive them, and we do the things that owners do. The whole point is that we produce results that are not corporate. We do towing, payload and off-road."

Although Four Wheeler's 2016 Pickup Truck of the Year award is one of those frowned upon by Elmer for not testing the entries on their towing and hauling capability, it's still a great example of why the 2016 Ram 1500 is such a truck to be reckoned with.

The Pickup Truck of the Year award program is actually an invitation-only shootout event that's open to all-new or significantly revised pickup trucks for the upcoming model year. For the 2016 event, the field of vehicles consisted of four competitors: the Chevy Colorado Z71, 2.8-litre I-4 turbodiesel, Nissan's Titan XD PRO-4X, 5.0-litre V-8 turbodiesel, the Ram 1500 Rebel, 5.7-litre V-8, and the Toyota Tacoma TRD Off-Road, 3.5-litre V-6. OK, the Ram 1500 here wasn't the EcoDiesel, but it still shows what a great truck the 1500 is.

Before we look more in-depth at the Ram 1500 EcoDiesel itself, we have to consider another benefit of diesel over gasoline for vehicles like full-size trucks, and it's the reason European automakers have been trying so hard for years to convince us to buy diesel passenger cars on this side of the Atlantic: fuel economy. Although fuel economy is less important right now than it has been for a long while due to continuing low gas prices, it's still a major concern for commercial operators. That's why big rigs and ships run on diesel. Lower running costs for businesses mean bigger profits, which is what the commercial world is all about really. As pickup trucks were primarily designed to be a commercial vehicle, it therefore makes sense for those designed for the bigger jobs to offer diesel power plants that have tons of capability and offer better fuel economy.

The 3.0-liter EcoDiesel V-6 option in the Ram 1500 produces 240 horsepower and that all-important 420 lb-ft of torque, and comes mated to an excellent eight-speed automatic transmission. It's offered in a wide range of different variants, although understandably, it is priced a little more expensively than a similarly equipped Ram with a Hemi V-8. However, the fuel consumption is as low as 11.3 L/100 km in the city and 8.0 L/100 km on the highway (4x2 HFE model), and that means it will work out cheaper in the long run than a V-8 if you do a lot of driving in your truck. Even if you prefer to go with a 4x4 drivetrain, the fuel economy is still extremely impressive at 12.1 L/100 km city and 8.8 L/100 km highway.

You can choose the 3.0-litre EcoDiesel V-6 in ST, SXT, SLT, Outdoorsman, Big Horn, Laramie, Laramie Longhorn and Laramie Limited trims, and four-wheel drive is available on every model, either part-time or full-time.

As well as the legendary durability and capability of the class-exclusive 3.0-litre EcoDiesel V-6 that makes it Canada's most fuel-efficient full-size pickup ever, the Ram 1500 also boasts a line of interiors that are among the most comfortable and feature-packed in the industry.

The interior is a little larger and more comfortable than its GMC, Chevy, and Ford rivals in terms of critical dimensions, but it's available with more clever storage solutions, and its controls are easier to make sense of and use. Like all of its rivals, the Ram 1500 comes in a wide range of box and cab configuration options.

The Ram is easily distinguished from its rivals thanks to its uncompromising Freightliner looks. The interior looks and feels absolutely fantastic and features a large screen and controls that make it among the most intuitive systems of its kind to operate and interpret. The Laramie Longhorn trim is particularly wonderful on the inside with its swathes of Southwestern leather and burl walnut, and there are more than enough standard and available features to keep even the most tech-obsessed buyer very happy indeed.

The Ram 1500 EcoDiesel can tow up to 9,210 pounds when properly equipped, and can haul payloads of up to a maximum of 1,540 pounds. With that kind of capability coupled with class-leading fuel economy and interiors that can rival some luxury sedans, it does make you wonder why you would consider anything else in this class. It's no wonder then that the 2016 Ram 1500 is one of the most popular pickup trucks with Canadian buyers in 2016.

Browse through our inventory and see if you can't find the perfect one for yourself.