The 2022 Jeep Wagoneer and Grand Wagoneer Are Back!

Home » The 2022 Jeep Wagoneer and Grand Wagoneer Are Back!

The 2022 Jeep Wagoneer and Grand Wagoneer Are Back!

Jeep is a brand that’s made its name as a favourite of the outdoor crowd. It’s a rugged, all-terrain car brand that’s known for offering a unique combination of style and performance in vehicles that are just as at home rolling over the rocky crags of a mountainous region as they are picking through a city to grab groceries.

For 2022, Jeep is looking to kick the luxury up a notch though, with the relaunch of a classic, the Jeep Wagoneer, and its larger, slightly fancier sibling, the Jeep Grand Wagoneer. And guess what? For all of the Jeep Wagoneer enthusiasts out there, the ones that have been waiting with bated breath for the release of the new version of the old wood-panelled gem that occupies so many sweet memories of past excursions, CarHub is set to receive our first 2022 versions of the Wagoneer.

But what can you expect from new Jeep Wagoneers when they land in the shop? Great question and one that we can’t wait to answer. Let’s get into it, shall we?

Is the Jeep Wagoneer Coming Back?

The Wagoneer may be a new vehicle for the uninitiated but to Jeep people, it's a return to form to a classic Jeep from a bygone era. The Wagoneer was first released in 1963. It was a wood-panelled curiosity and it quickly lent itself to an image of the adventurous, American family on vacation. It was released alongside its larger, more luxurious sibling at the time too, the Grand Wagoneer SUV. In more recent memory, Jeep fans will point to the ‘Wagoneer’ name being applied to trim levels for the Cherokee and the Grand Cherokee in the 90s.

The Wagoneer may not be a new name but the vehicle that is about to grace our lots is a far cry from its ancestors. A classic name with the same incredible attention to quality as past examples but with the addition of modern tech in the creation of the 2022 Jeep Wagoneer and 2022 Jeep Grand Wagoneer. 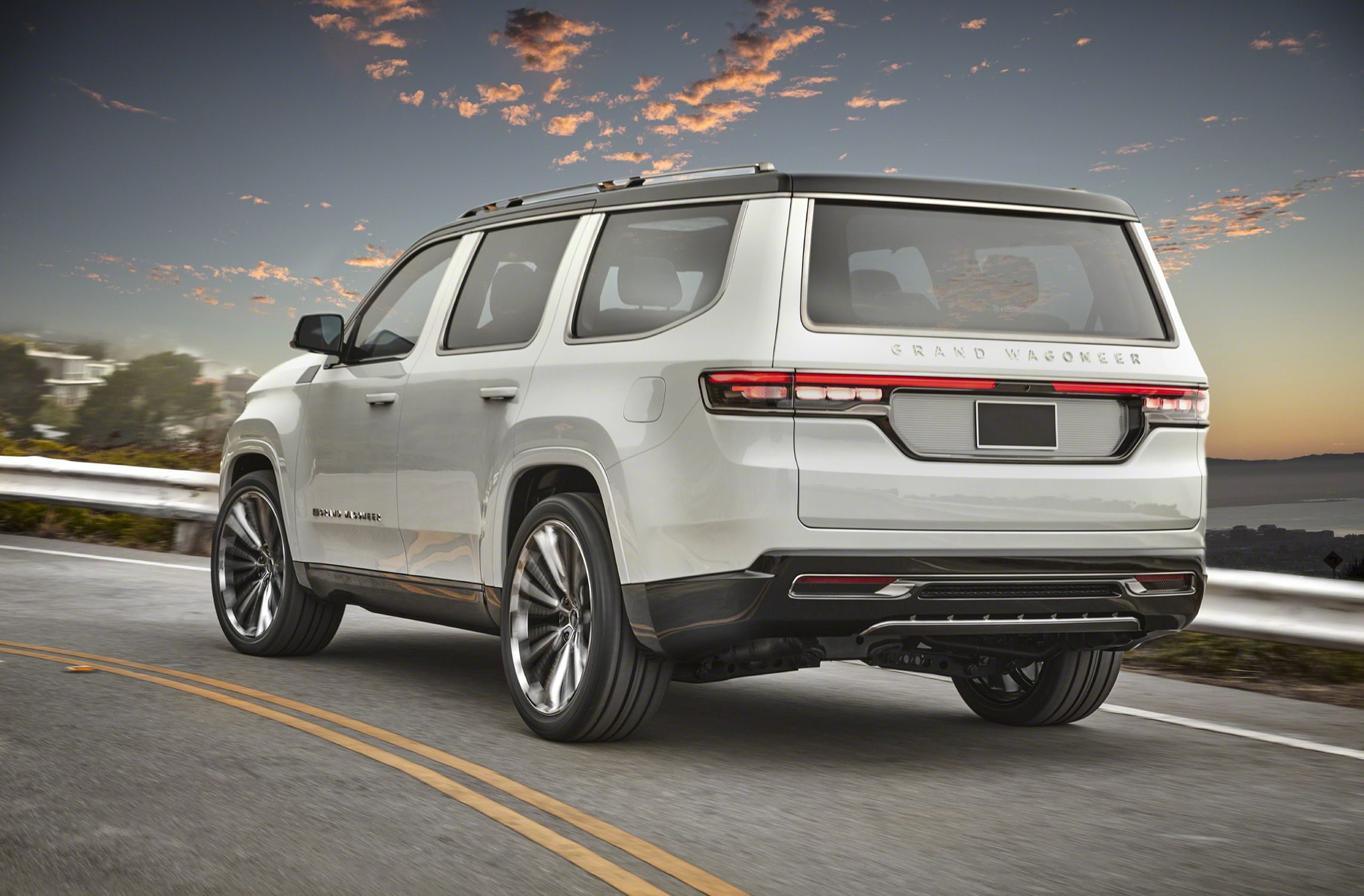 A spin in the Wagoneer will get you a 392 horsepower, 5.7 V8 engine. In other words, you definitely won’t find yourself lacking for power when you get behind the wheel of a 2022 Jeep Wagoneer. And here’s something that you surely wouldn’t have found in the Wagoneers of the past: every Wagoneer model is bolstered by a 48-volt hybrid system that kicks in and lends a cylinder deactivation feature to save on gas consumption.

Ok, so it’s a real head-turner on the city streets, how about if I want to take the 2022 Wagoneer for a trip in the country?

The Wagoneer sacrifices none of the rugged, off-road capabilities that come with the name, with a four-wheel-drive version available that pairs with an eight-speed automatic transmission. The Jeep Wagoneer 2022 features an adjustable air suspension that allows the Wagoneer to raise an additional 3.6 inches off of the ground for some extra off-road clearance. A drive mode selector will give the driver the option to optimize the Wagoneer for the surface that is most appropriate for the Wagoneer to rip up the road, from sand/mud to snow and rock modes. Whether it’s the two-wheel drive or the slightly beefier four-wheel-drive variant, the Wagoneer is rated to tow up to 10,000 pounds, which should be more than enough to haul anything that your weekend ambitions may lead you to. 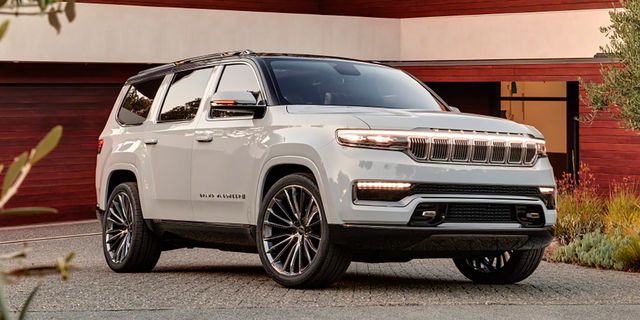 One thing that should be noted about the 2022 Wagoneer: this is a no-joke, go-for-broke, luxurious SUV. The new Wagoneer will feature three spacious rows of seats for passengers in the new Wagoneer to really stretch out. The cabin features decadent items such as leather flare within the upholstery, ambient lighting capability, and climate control that is automatically adjusted in three zones of the cabin. Cabin space is ample, especially with the third row folded down, so if you want to transition your weekend gallivanting into a more utilitarian trip that requires some cargo hauling, the option is there for you.

We’re talking screen city inside the 2022 Jeep Wagoneer. It’ll feel like you’re sitting in a sports bar there are so many screens coming at you. Ok, maybe not quite that many but you will get a 10.1-inch infotainment display and a 10.3 gauge display that will give you a digital reading of all of the pertinent action in the car as you’re driving.

There’s also an option for an additional screen that will allow the driver to access an integrated display for all navigation and entertainment functionality. The infotainment system in the Wagoneer is powered by the Uconnect 5 software system, which allows the Wagoneer to power a grab bag of fantastic applications, such as Android Auto, SiriusXM satellite radio, Apple CarPlay. The Uconnect 5 will also allow for Amazon FireTV, Alexa, and a 4G LTE Wi-Fi hotspot. Oh, and an available 19-speaker system in the stereo from McIntosh.

Ok, maybe that sports bar comment wasn’t too far from the truth. This thing has more bells and whistles in it than the most-screen heavy of establishments and the added benefit of being on wheels, should you happen to want to watch the game while on the move. 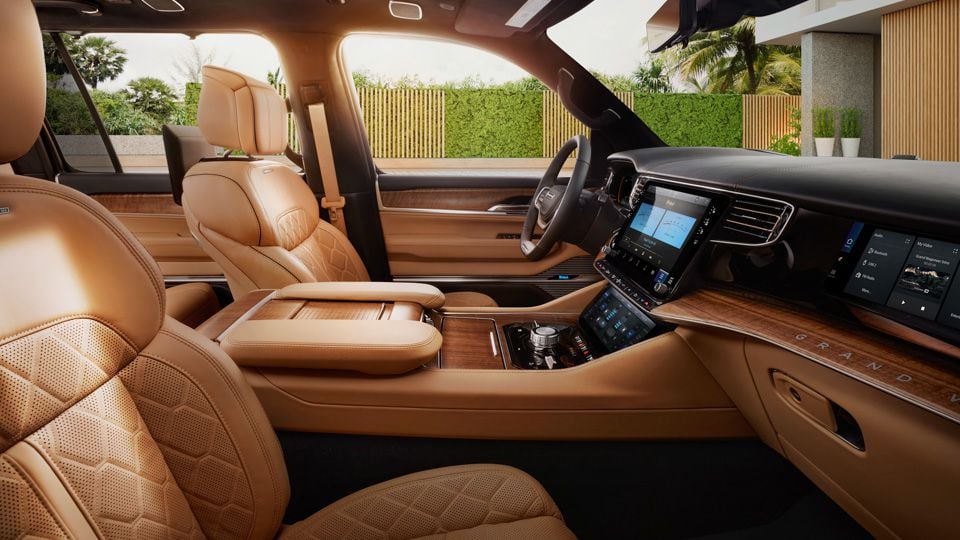 What’s the Difference Between Them?

Want to lower that big beast to get in and out? No problem at all in the Grand Wagoneer! The Quadra-Lift suspension will give you the ability to lower the vehicle and add some aerodynamic goodness while you’re flying down the road as well. Quadra-lift is available on the Wagoneer as well but on the Grand Wagoneer, it’s a standard feature. 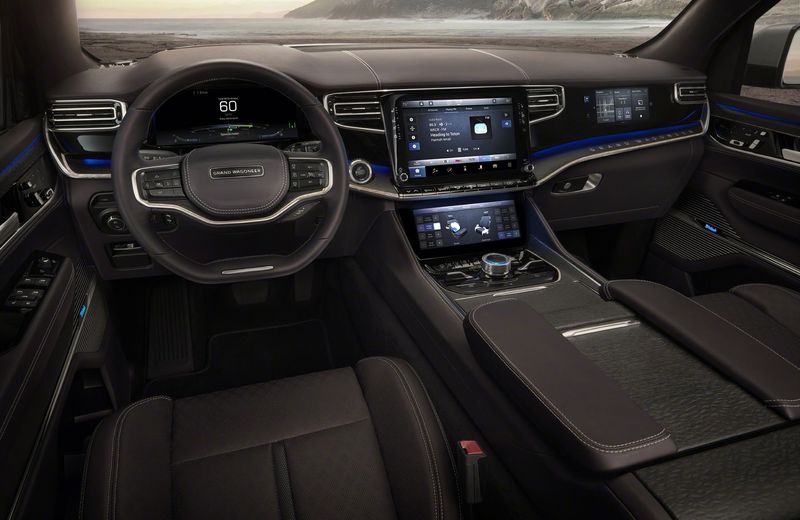 Finally, on the inside, the 2022 Jeep Grand Wagoneer kicks up the Nappa leather seats to Palermo leather and makes the three quadrant climate control a four-compartment system. 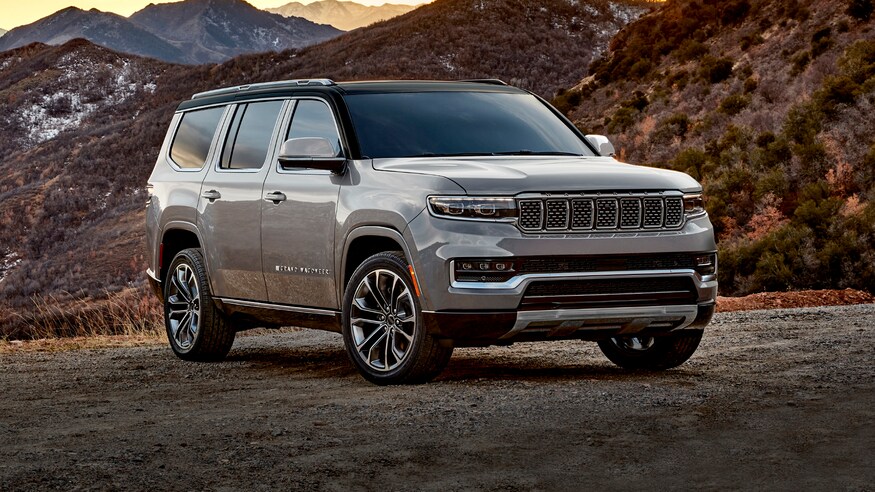 The Wagoneers Are Here

Categories: Know Your Trim, Get To Know Your Car, The More You Know, What's New