The Pentastar V6 vs The HEMI V8 - Which is Better?

Home » The Pentastar V6 vs The HEMI V8 - Which is Better?

The Pentastar V6 vs The HEMI V8 - Which is Better?

Ah, the great debate! What type of engine should you choose? Your engine is the heart, soul, brain, and brawn of your vehicle. Here at CarHub, the question is often posed to us: ‘should I choose a V6 or HEMI V8 as my engine?” This seems to be especially true for customers who are looking to purchase a truck, so for this article, we’re going to focus on the RAM 1500, a best-in-class pickup truck and one of our best sellers.

We Love Us Some Trucks

It’s no secret that at CarHub, we love our trucks. We’re big, big fans of the RAM 1500 and if you’re in the market for a RAM, you’ll know that 1500’s come equipped with one of two incredible engine designs, the Pentastar V6 and the Hemi V8, (as well as an available V8 with eTorque). Both the V6 Pentastar and the V8 HEMI bring value and brawn to the table and they both offer benefits from different areas of the engine spectrum.

When choosing a vehicle, especially a workhorse of a vehicle like a truck, it’s worth doing a bit of work to understand what’s powering the heart and soul of your new purchase. Your truck’s engine is the part of it that affects its performance, price, and mileage. It’s the difference between a heavy-hauler and road ripper or a get-the-job-done with not much fun type of ride. That’s why it’s worth knowing what the V6 and the V8 can offer you and what their differences are.

In the case of the RAM 1500, both engines will be paired with a TorqueFlite 8-speed transmission. This works for our examination but in other cases when you are weighing the benefits and drawbacks of choosing a V6 or a V8 engine, you may want to take additional specifications such as transmission into account.

In the case of the RAM 1500, the TorqueFlite’s 8 gears allow for excellent acceleration and smooth shifting, no matter which of the available engines you choose for your RAM 1500, you can feel safe in the knowledge that your engine is paired with a downright doozy of a transmission that will assist in its performance and give you a best-in-class ride.

The Pentastar V6 is a durable workhorse of an engine that has continued to impress in all of the vehicles that it finds itself powering. It provides 305 horsepower and more than enough kick to get the job done for most load-haulers, and off-roaders. More than a million of these steady-eddie engines have been produced and they’re a tech favourite for being reliable and easy to maintain. 3.6 l Pentastar V6 is one of the most common applications of this engine like Chrysler and Jeep V6 Pentastar engine. Your might also be interested to learn about the V6 engine and inline engine.

So, you’ve examined your needs and you think that the V6 is just not gonna cut it. It’s a fine engine, one that’s up to many a task but you know that you have enough hauling needs to necessitate a bigger beast under the hood, you’re going to need to step it up to the mighty RAM V8 HEMI. This brawny brute will get you 400 horsepower and 410 lbs/feet of torque, which is enough to attack any hauling challenge that you may have to throw at it head-on. This is muscle car energy that is built with one thing in mind: power. 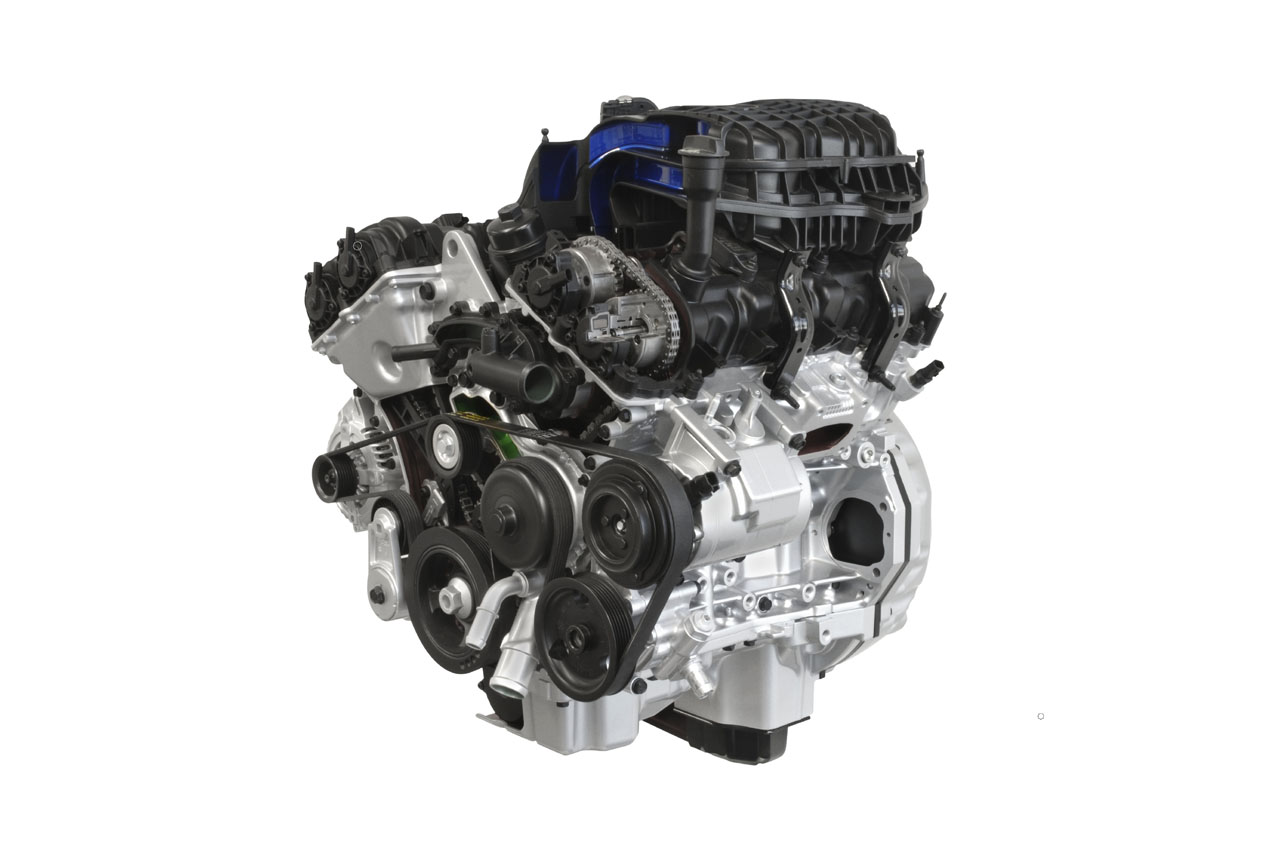 The Pentastar V6 has served as a solid workhorse engine for Chrysler vehicles since its introduction in 2010. The name ‘Pentastar’ was derived from Chrysler’s branding, which featured the iconic five-point logo. Sandwiched between the economical four-cylinder and the beastly HEMI V8, the Pentastar V6 is known as a reliable, do-it-all engine that can kick out the power without sacrificing fuel efficiency.

The Pentastar V6’s versatility has allowed it to be used in every type of vehicle in the Stellantis line. You’ll find the Pentastar V6 in Jeep Wranglers, RAM 1500’s, and even Dodge Chargers.

The Hemi engine has been around almost since the beginning of the car engine but it wasn’t until the 1964 NASCAR Daytona 500 that Chrysler first introduced a 426-cubic inch Hemi put out 425 horsepower fitted into a race car that finally solidified the hemi as a major player in the automotive world and when it became a ‘HEMI’, the remorseless beast that was synonymous with power. The car with the Chrysler 426 HEMI in it destroyed the competition and a star was born. 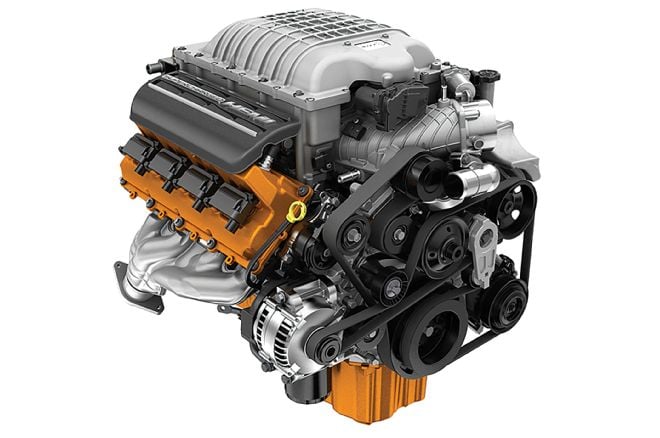 Most people who truck, tow. That’s no secret. So, if someone finds themselves in the market for a truck, they’re likely going to be concerned with how much weight it can pull. The Pentastar V6 is rated for up to 3 tonnes or more of towing capacity. For most people and most jobs that will be more than enough. Need to haul a trailer, boat, or heavy load? The answer is that the V6 is likely up to the task. This comes down to a question for the driver though: how much oomph do you need in your truck to get your jobs done the way that you’d like to see them done?

For towing capacity, the HEMI is in it to win it: it’s capable of hauling more than 10,000 pounds of whatever you have to throw at it, in it, or behind it. That’s some serious weight! Though the V6 is a serious engine in its own right, that’s a big jump up for the V8 HEMI in terms of what it can pull.

Your choice of engine will affect your bottom line so it’s worth considering and being realistic about. Here’s a thought: how many times a year will you need the capacity of a V8 Hemi to get your jobs done? The V6 will offer your MPG efficiency that is tough for the V8 to match, so it’s tough to say which of these award-winning workhorse engines are better but priorities factor into the mix for the buyer.

The kind of power that the HEMI V8 is capable of putting out is going to come with a cost. You’re going to pay for that power in terms of fuel economy compared to the V6, however. but with the RAM’s Fuel Saver Technology, the smart engine will shut down unneeded cylinders when the vehicle is at cruising speed.

The V8 option with eTorque does, even more, to kick up the savings for a heavy-duty engine by replacing the traditional alternator with a 48-volt battery-powered, belt-drive motor generator that gives the fuel consumption a rest and lets efficiency take center-stage as well as lending a helping hand to towing and payload capabilities. 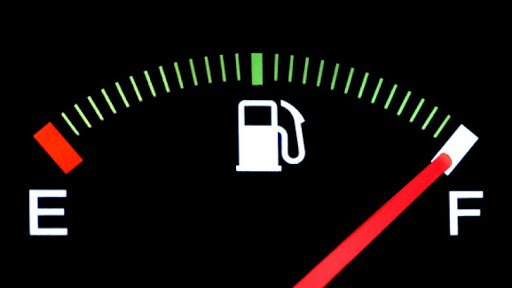 The Grand Winner Is…

Ok, not to get too philosophical about it but here’s the thing: the best engine is the one that’s right for you.

How can you make a conclusive decision between two amazing engines that cover all of the bases that anyone could want for the driving force of their vehicle? It’s less that one is better than the other and more that one may be the better option for some people.

The real work is in digging in and coming to an understanding of which of these best-in-class, multi-award winners is the option for you. In the Pentastar V6 or the V8 HEMI, you are going to get two reliable engines that bring the power, strength, and toughness that RAM is known for to the fore.

If you need to haul but you aren’t pulling serious, back-breaking weight all of the time the Pentastar V6 may be the route. A fantastic, much-lauded, capable engine, the V6 will save you a few bucks out of the gate and likely a few more at the gas pumps.

If you’re a heavy hauler and you need to pull some serious weight the V8 may be the choice for you. The V8 HEMI is a big beast of an engine and you’ll give up some fuel efficiency by choosing it but with fantastic RAM technical additions such as Fuel Saver Technology and eTorque, that bite will be mitigated compared to the big V8’s of the past.

Ready to Take the Plunge?

You can contact us today to speak to a Product Advisor for more information about the Pentastar V6 and the HEMI V8 and take a RAM 1500 equipped with either of these fantastic engines for a spin.

Categories: The More You Know, Story, Get To Know Your Car