Jeep Wrangler 4xe - Everything That You Need to Know

Home » Jeep Wrangler 4xe - Everything That You Need to Know

Jeep Wrangler 4xe - Everything That You Need to Know

You can’t say ‘off-road’ without thinking of the Jeep Wrangler 4xe, and here at CarHub, we rarely do. The Wrangler is a vehicle that’s made its mark as a go-to for the more adventurous of us since Jeep has made the leap from military to personal vehicle. Since it made that leap it has become one of those rare vehicles that are more than just a car to its legions of fans. It’s a thing that people craft a persona around, a thing that creates communities, a thing that becomes the reason to look forward to the weekend. 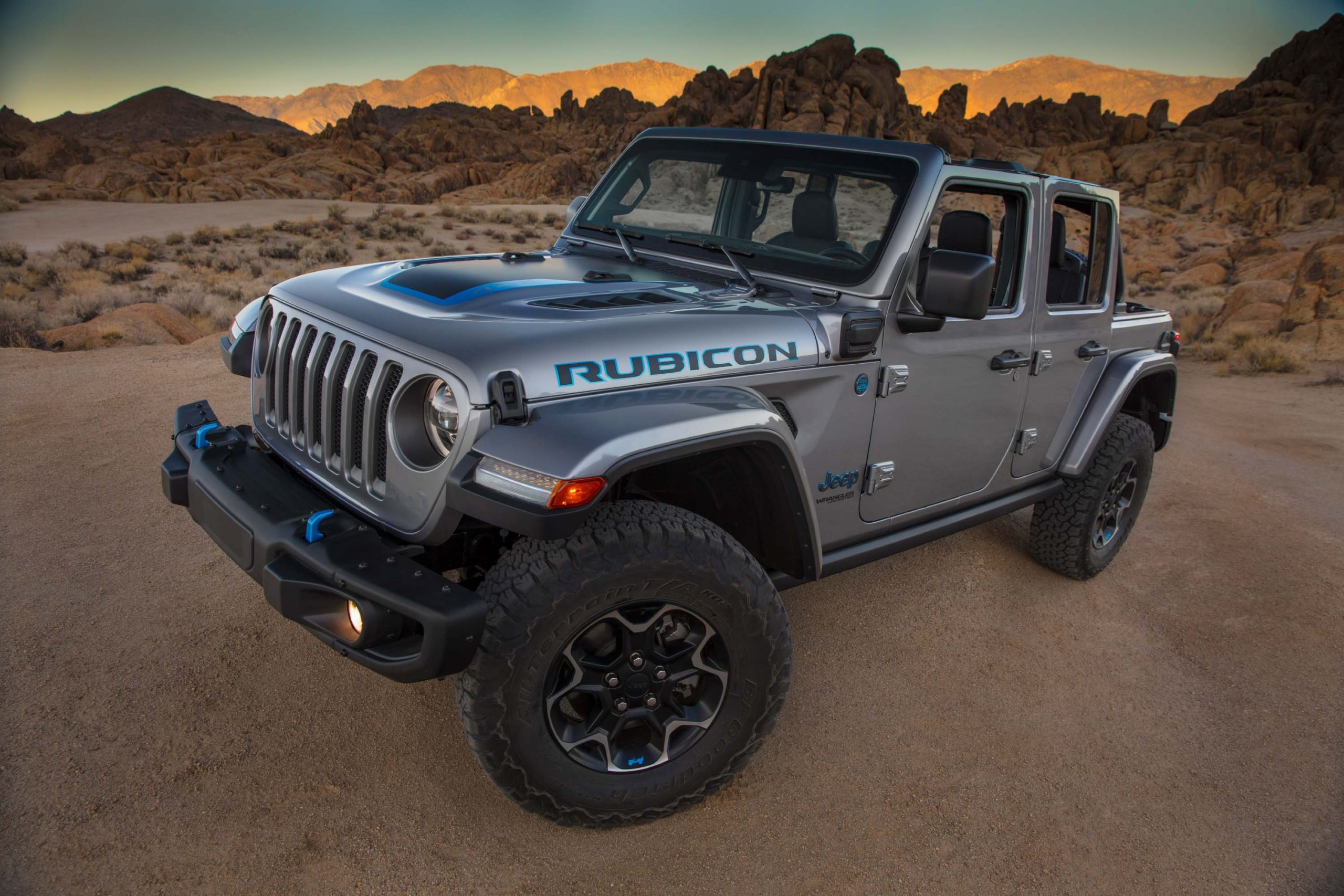 Why Mess With the Best?

If you already know what is trim on a car, then with the myriad Jeep trims that are already in existence, it may seem like this iconic vehicle couldn’t possibly get any more interesting. The Jeep powertrain lineup already has the versatility to allow the Wrangler to act as a curb-hopping, suburban grocery grabber as well as a sturdy off-roader. The times they are a-changin' though and we’ve hit a stage where sustainability is paramount to the success of any vehicle’s future, even the stalwarts of the industry, like the Jeep Wrangler.

Enter the Jeep Wrangler 4xe (pronounced ‘four-by-E’). The Jeep 4xe is a hybrid that is sure to satisfy even the most aggressive power-hungry gas holdout. It matches classic Wrangler styling with an engine that doesn’t lose any of the punch that has made the Wrangler a favourite of the rock-hopping set. 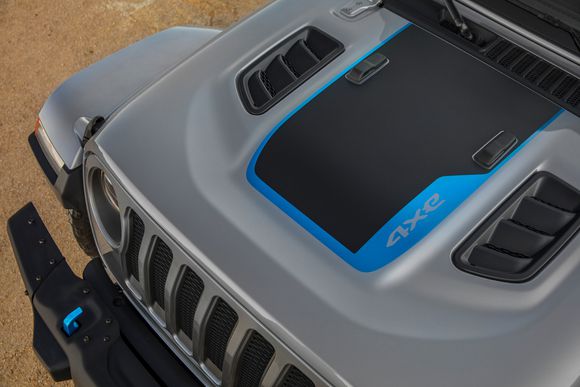 The Jeep 4xe uses its jolts in combination with two available engines: the 285-hp 3.6-liter V-6, 270-hp turbocharged 2.0-liter four-cylinder, and 260-hp turbo-diesel 3.0-liter V-6. What could be more shocking than that? Possibly that the Jeep Wrangler already had mild electrification with the eTorque system, which replaces the traditional Jeep alternator with a 48-volt battery-powered, belt-driven motor-generator. The eTorque system kicks up the performance and efficiency of the Jeep 4xe, as well as offering a boost to the towing and payload capacity.

That’s a whole lotta cutting-edge tech happening under one hood!

In the Jeep Wrangler 4xe, the engine finds itself resting alongside an eight-speed automatic transmission and a lithium-ion battery pack that resides underneath the rear seat. Don’t worry, the charging port has been positioned high on the body, (hopefully) out of range of your messiest and muddiest adventures.

With three power units acting in conjunction with one another, you may well imagine that the Wrangler 4xe generates a fair amount of power - and you’d be right. The Jeep 4xe kicks out 375 horsepower and 470 lb-ft of torque. This makes the Jeep 4xe amongst the most powerful and speediest Wranglers - an impressive feat since the battery pack does kick up the weight of the Wrangler 4xe without diminishing any of its performance. 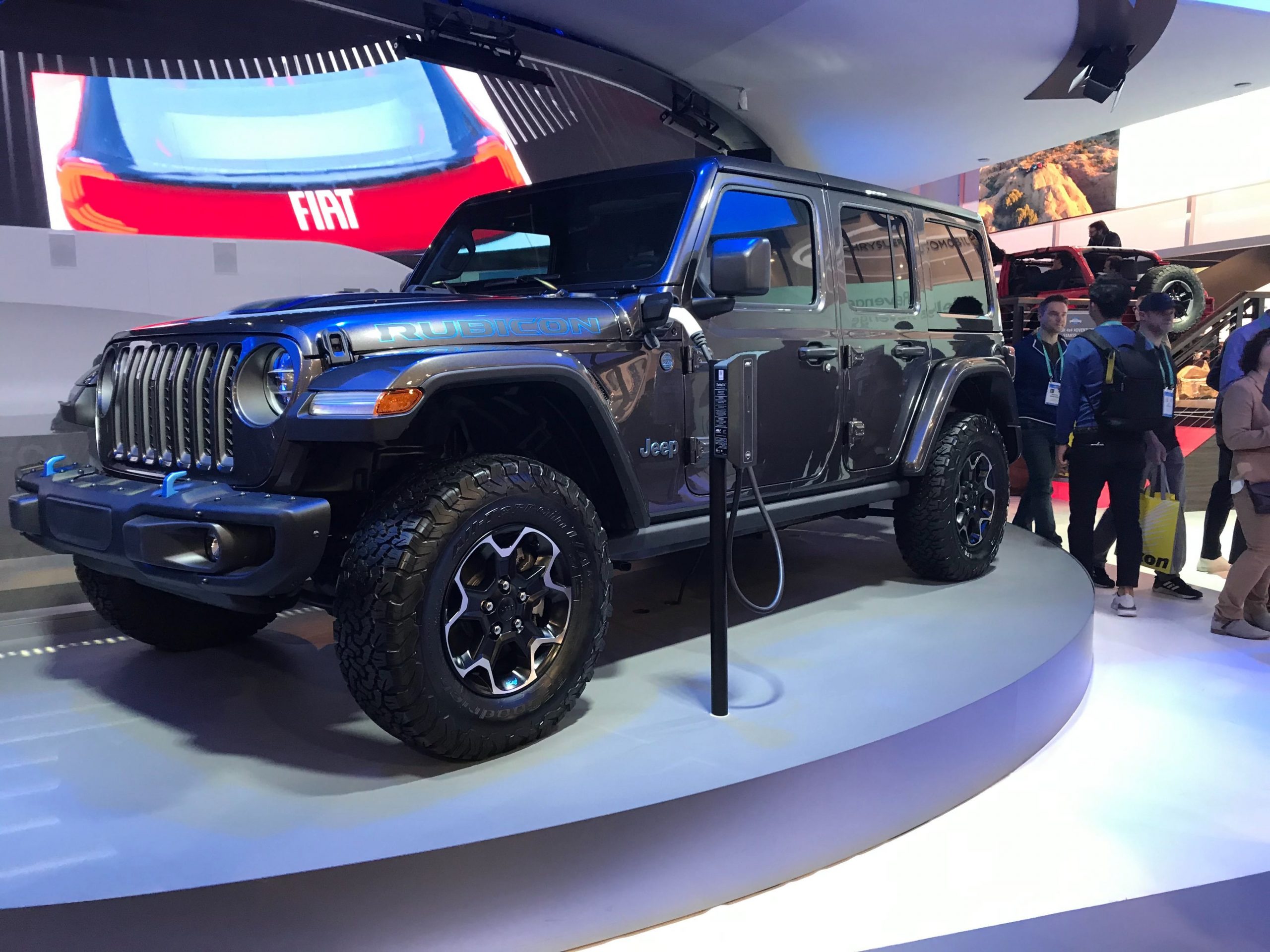 The Jeep Wrangler is a plug-in hybrid and it uses regenerative braking to assist in running a 400v output from a 17kWh lithium battery. The battery in the Wrangler 4xe runs to two motor/generators. One of these replaces the front engine’s alternator and the other is in place of the torque converter (which is the aforementioned eTorque). Stop and start capacities are handled by one of the motors, while the second one runs two clutches, one that is linked to the 4xe’s 8-speed automatic gearbox, the other that decides whether the 4xe will run on electricity or good old fashioned gasoline.

Wranglers are meant for the off-road though, so every Wrangler is trail-ready. As a result, the 4xe’s battery is mounted inside the Jeep, above the floor pan is a completely waterproof compartment. So, if you’re a ‘beat not babied’ type when it comes to your SUV, you can rest assured that a little water isn’t going to affect your battery pack.

As much as we love the Jeep Wrangler, fuel economy has not traditionally listed on the high end of its talents. That is, until now. The EPA estimate of the 2021 Jeep Wrangler gives a pure electric range of 21 miles (33km) and scores 49MPGe as per the Environmental Protection Agency.

When the Wrangler 4xe is running solely on gas, the 4xe behaves like a classic hybrid, which puts the 4xe at 20 mpg (32 Km) combined, while running on regular, unleaded gas. Not too shabby! 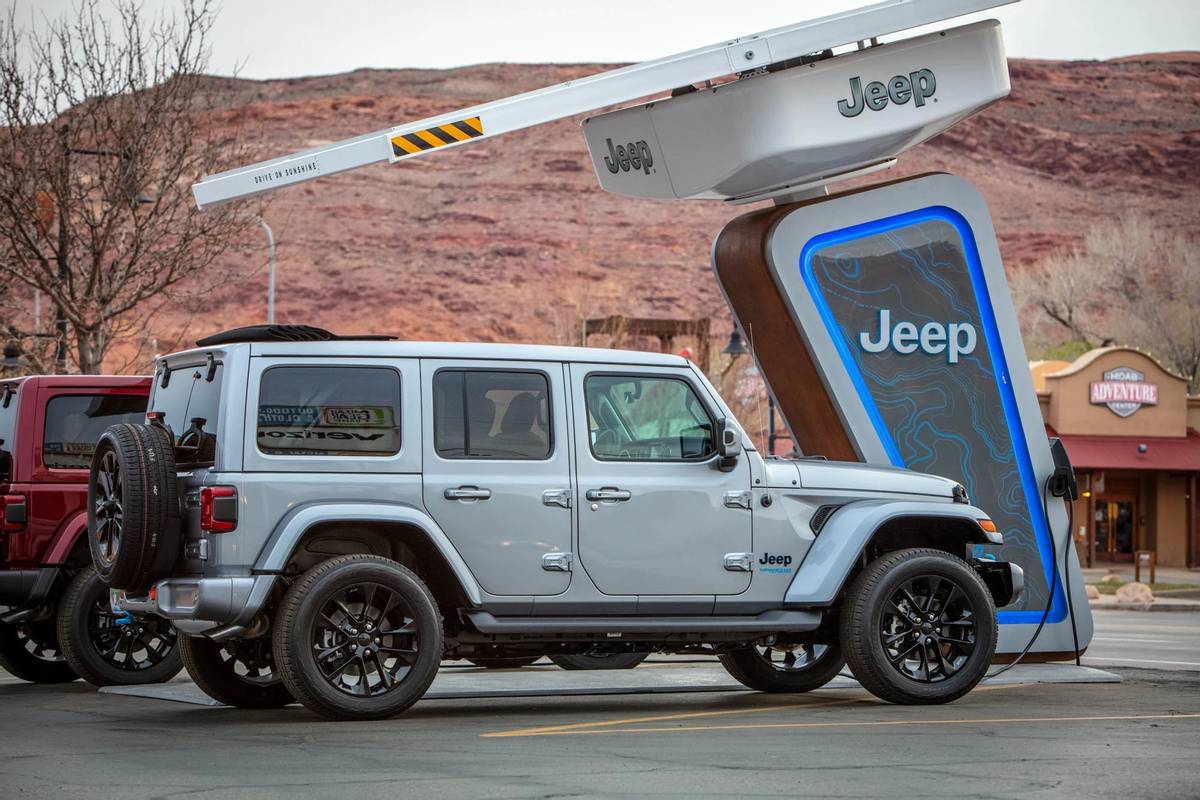 The Driver’s In Charge of the Charge

The best drivers want autonomy over their vehicle and the 4xe recognizes that in letting the driver decide which energy source gets used. If you want to save your battery for down the road, flipping the E-Save switch will divert the power to the gas engine. If you want to run fully electric or as a hybrid those options are available as well. Or, you could let the 4xe make those decisions for you, as it was meant to do.

Is It Still an Off-Road Beast?

The Wrangler 4xe may be bringing a little more modern innovation to the table than its Wrangler counterparts but the good people at Jeep have been sure to make the 4xe just as ready to battle wilderness as any other Wrangler. The 4xe still features the iconic Wrangler’s most distinguishing traits, like the skid plates, rock rails, lockable differentials a Dana front and rear axles. There are also many options as per the power output, as the two-speed transfer case in the 4xe allows for rear or full-wheel drive, as well as part-time high-range or low-range four-wheel drive.

As a bonus, the 4xe offers a whisper-quiet ride that a fully gas-powered vehicle could not match. Care to see a few critters scurrying about when you make your way into the wilderness? In the 4xe you won’t be scaring any animals away. 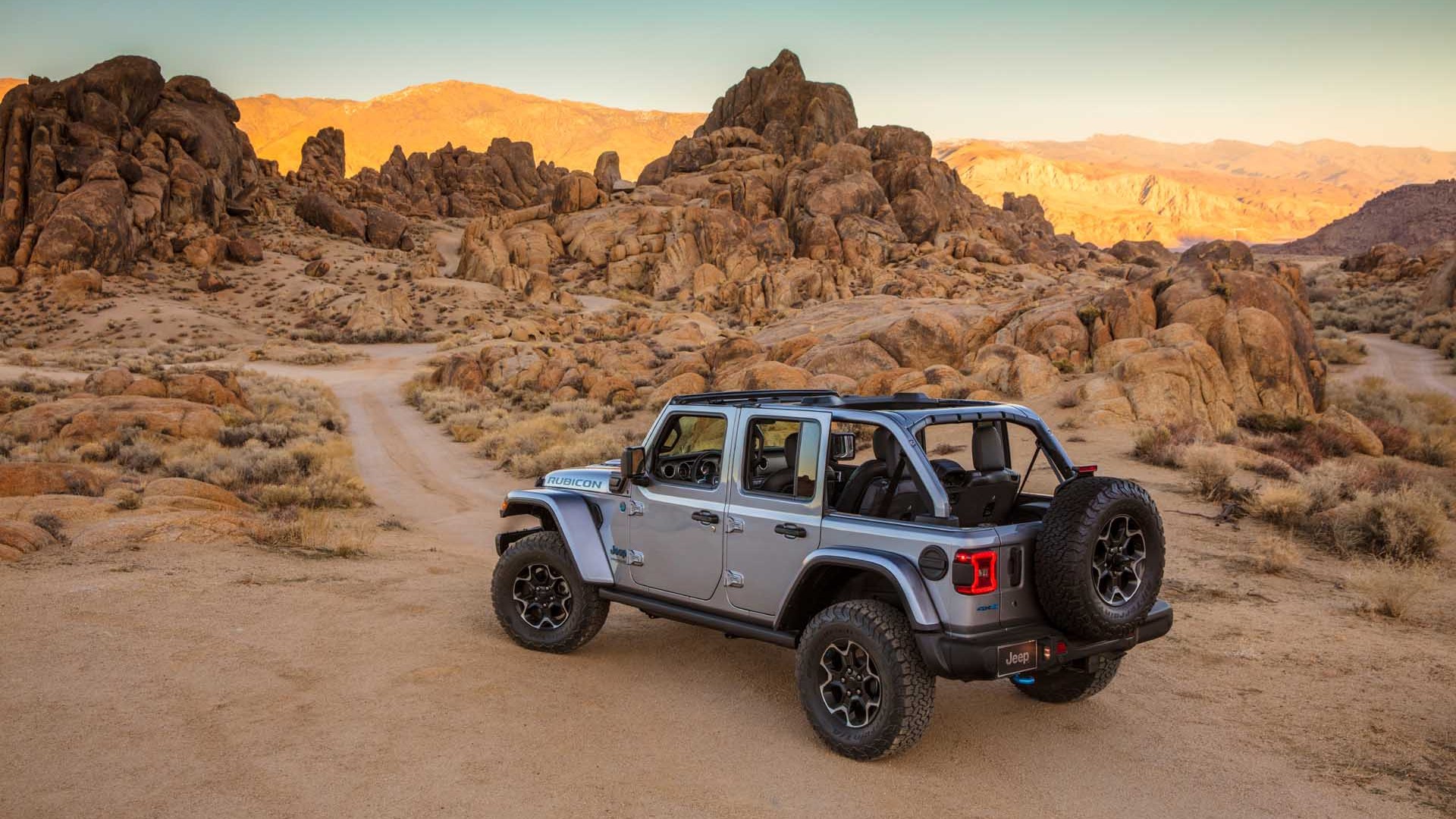 Environmentally friendly, fuel-efficient, and still ready to hit the trails with the best of them? Who would have thought that a hybrid vehicle could be rated as highly as its gas-guzzling counterparts when it comes to getting off of the beaten path? Here we are though, the 2021 Jeep Wrangler 4xe is truly a feat to behold.

Want to check out a 2021 Jeep Wrangler 4xe in person? You can contact us to book an appointment for a meet and greet with the most impressively innovative SUV on the automotive market today.

Categories: What's New, Story, Get To Know Your Car