Does Fuel Economy Matter to You?

Are you made of money? For most drivers, the answer to that will be no. Sure, maybe the Jeff Bezos’ of the world wouldn’t care if they burn through their billfold but you likely will.

If it so happens that you are not, in fact, made of money, then the fuel economy of a vehicle that you choose will likely be important to you. It has been the folly of many a car buyer to leave this item out of the general consideration list of their new car only to rue their lack of foresight when the gas bills start to pile up.

The majority of today’s cars don’t guzzle gas like cars of the past but there are still relative winners when it comes to efficiency in the fuel department.

Fuel economy also has a huge impact on environmental efficiency. In today’s vehicle landscape, the conscious consumer often considers the environment in their purchase. As green energy within the automotive sector continues to evolve so does the extent to which CO2 emissions will continue to play a huge factor in how vehicles are manufactured moving forward. If concern for the environment is something that moves you as a consumer, the best way to track the fuel economy of a specific vehicle is through EPA estimates.

Unlike the days of the past, the automotive world is full of options at present. More than ever vehicles have a hybrid trim offering and a long list of electric vehicles is coming down the pipeline soon.

At CarHub, we make it our business to know all of the details of our vehicles, and fuel efficiency is one of the most important details about any vehicle. That’s why we’ve created a full breakdown of the fuel economy of some of our favourite 2021 vehicles. You don’t have to do the legwork of looking it all up because we’ve already done it for you. 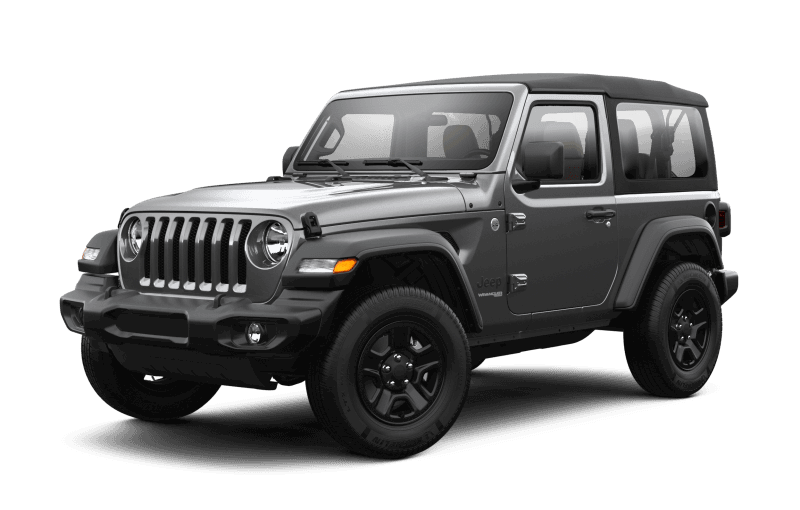 The 2021 Jeep Wrangler finds itself in a segment of vehicles that trades in some fuel efficiency in exchange for amped-up performance. That being said, the Wrangler outperforms its rivals in this regard, such as the Toyota 4Runner and the Chevrolet Colorado ZR2. The highest performer when it comes to fuel efficiency in the Wrangler family is, not surprisingly, the four-cylinder hybrid model, which Car and Driver tested at 26 miles per gallon (41km).

A full breakdown of the Jeep Wrangler’s fuel economy can be found on the U.S. government’s fuel efficiency guide. 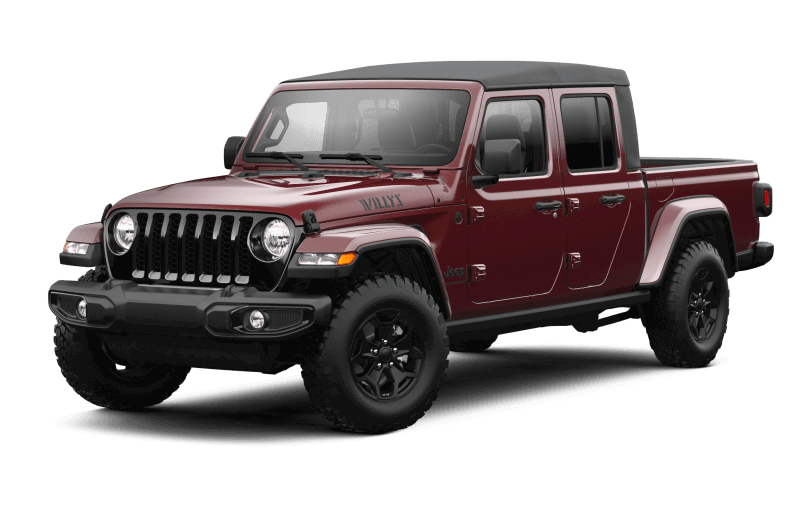 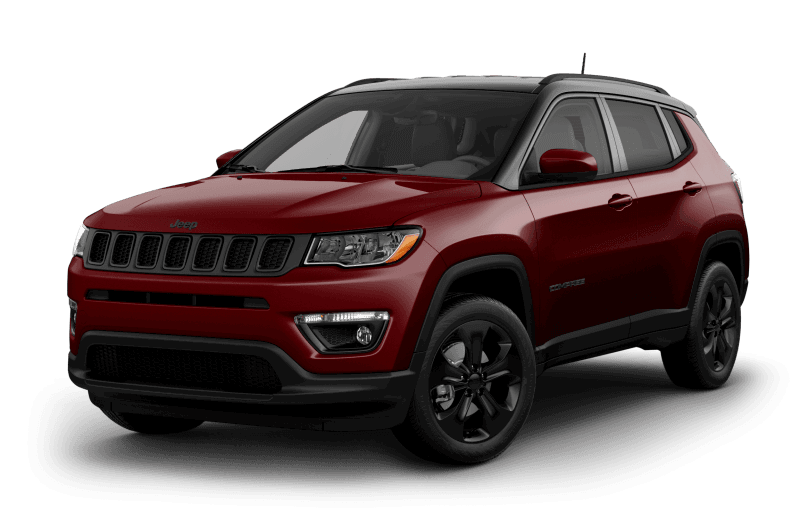 The 2021 Jeep Compass keeps up with its competition on the fuel economy front despite being in a class with some smaller and lighter vehicles. According to the EPA, the 2021 Jeep Compass will get about 22 mpg in the city and 31 mpg on the highway. That’s a good range for a mid-sized SUV, in line with competitors in its class and good enough to get you from A to B without burning too much fuel on the run. 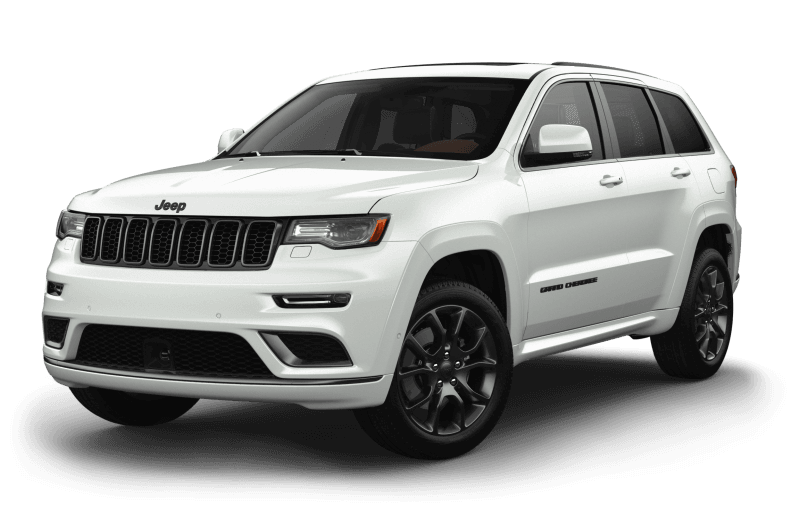 The 2021 Jeep Grand Cherokee gets a lot of road covered with a tank of gas. With the standard 3.6L V6, the Jeep Grand Cherokee gets 19 mpg (30km) in the city and 26 mpg (41km) on the highway, according to the EPA. That’s a good range for an SUV of its size and class and in the coming year, a 4Xe model will be released that should see a marked improvement in this area as well. 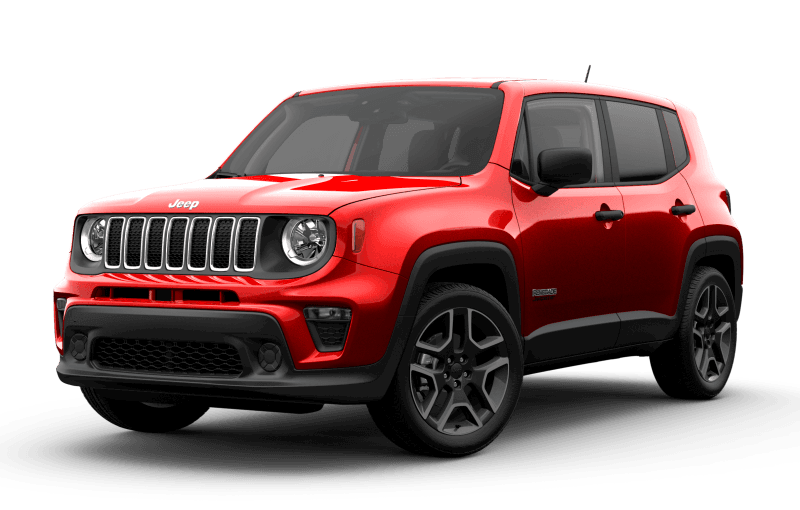 Jeep’s compact crossover offering, the Renegade, is a fuel-efficient little booter that comes with an optional turbocharged 1.3L engine which the EPA says will earn it 24 mpg (38km) in the city and 32 mpg (51km) on the highway. The 2021 Jeep Renegade is the type of compact vehicle that’s made for ripping around town to get the chores done but also tacks on some SUV capabilities for an added bit of fun. And with fuel economy statistics to beat the competition in its class, it’s a good bet as a nifty little whip that won’t beat down your wallet. 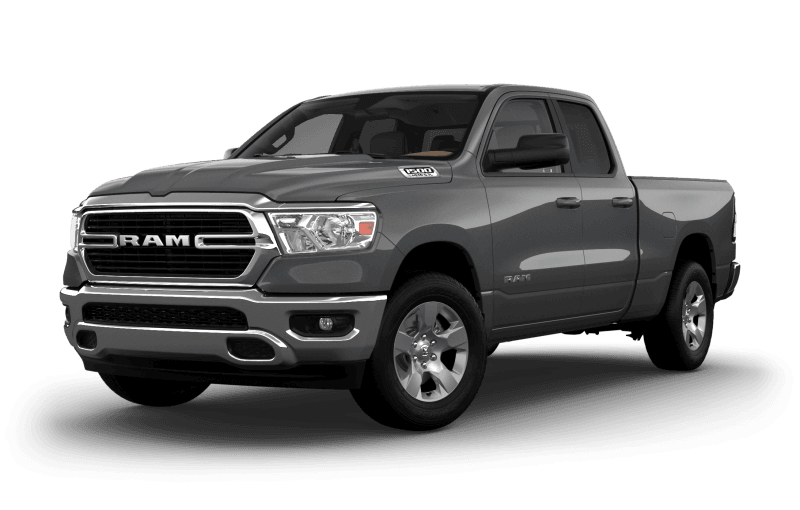 Fuel often comes as a secondary consideration in the pickup truck world. For vehicles that are meant to haul, hauling is the main focus and all else comes secondary. Still, truck drivers aren’t immune to the pinch on a wallet that poor fuel economy can cause and they are increasingly environmentally conscious and concerned with how their vehicles will affect the climate. As a result, RAM has focused some attention on the fuel economy aspects of the 1500. The results are more effective in some of the trim lines than others (there are hybridized versions of both the V6 and the V8) but all in all, the 2021 RAM 1500 is a pickup truck that delivers performance alongside fuel efficiency. According to the EPA, the most efficient of the 1500’s is 2-wheel drive V6, which will get 26 miles (41km) per gallon on a highway stretch and 20 mpg (32km) in the city.

The RAM 1500 is known as a luxury-laden, performance-focused workhorse. Its fuel efficiency is known as effective for the class of vehicle that it is in but it’s no Prius. It really comes down to a question of what you value in your truck. Normally for trucks work comes first and other considerations follow. In the RAM 1500 you can be confident that you’ll get best-in-class results from both the performance and fuel efficiency of the vehicle. 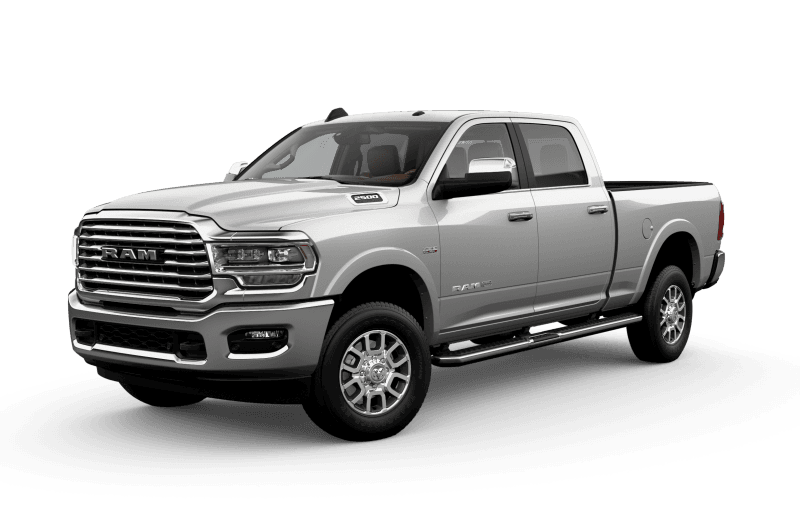 The 2021 RAM 2500 is a beast of a truck that is meant for one thing: hauling in a heavy-duty way. That means that trucks like 1500, 2500 owners probably list their priorities as performance higher than efficiency. That doesn’t mean that efficiency shouldn’t be a concern, however, and RAM puts some emphasis on the fuel economy of the 2500 regardless of the prioritized demand for it. The RAM 2500 has active grille shutters that add to its aerodynamics and gas models now feature an eight-speed transmission that provides a marked improvement on fuel economy.

Unfortunately, the EPA doesn’t rate the fuel economy of commercial vehicles and the 2500 falls into that category of trucks. MotorTrend did a real-world MPG test though and concluded that the 2500 scored 13.2/18.0/15.0 in a test with a truck equipped with the H.O. Cummins engine and four-wheel drive, an admirable rating for a heavy-duty truck such as the 2500. 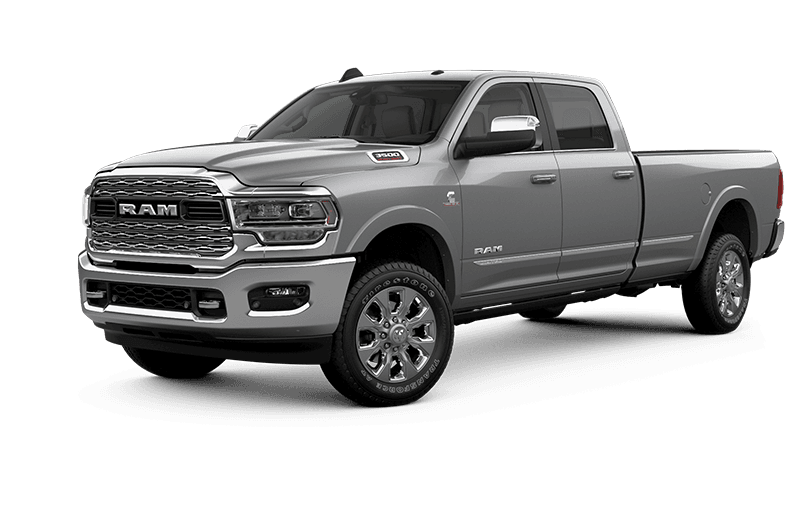 The 2021 RAM 3500 is another beast of a commercial vehicle that doesn’t fall under the purview of the EPA’s rating system. Anything with a Gross Vehicle Weight Rating of more than 8500 pounds doesn’t. Again, that doesn’t mean that it shouldn’t be a consideration. After all, money doesn’t grow on trees and commercial vehicles are likely used in business affairs more than anything else, where money concerns are tantamount to success. Luckily, Car and Driver did a real-world test of a monster of a RAM 3500 equipped with a high-output Cummins engine, four-wheel drive, dual-rear-wheel-axle and a mega cab and concluded that it earned 16 mpg (26km) as part of a 75 mph (120km) fuel economy route. Not bad for a heavy-duty commercial vehicle! 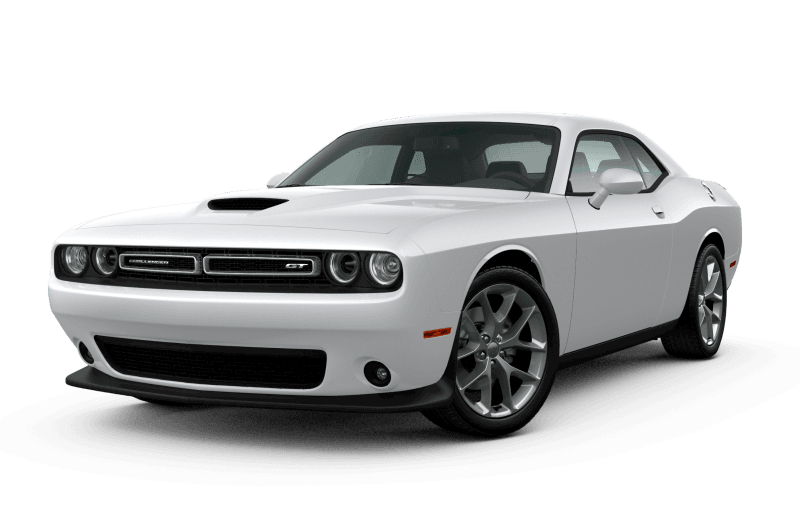 The Dodge Challenger brings classic muscle car good looks and performance with modern updates that push it out of the realm of the gas guzzlers of the past. The 2021 Dodge Challenger has earned an EPA rating of 19 mpg (30km) for city driving and 30 (48km) for the highway, though the all-wheel-drive version knocks those scores down a touch. For a combination of muscle car aesthetic and real-world efficiency, the Dodge Challenger is the ride to beat!

If you’re looking for more insights about the Challenger’s specs, Car and Driver did a test independent of the EPA rating with both a V6 and V8 version of the 2021 Challenger. 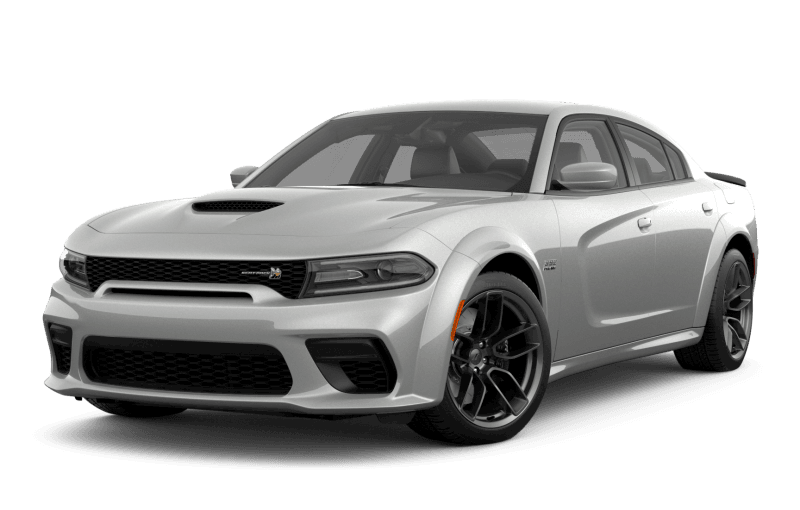 Another addition to the muscle car pantheon is the Dodge Charger. It’s a big car and it makes no bones about the amount of fuel that it consumes but Dodge has made sure that it operates at competitive levels in its class. The EPA estimates for the 2021 Dodge Charger give it a great highway rating, so when you’re in a Charger you’d be best served to fire it up on an open road. Car and Driver did an independent test of the 2021 Dodge Charger V8 and found that it got 25 mpg (40km) for highway driving.

Fuel economy is not the first thing that generally comes to mind when you hear the word ‘minivan’ but the Dodge Grand Caravan (rebranded this year as the Chrysler Grand Caravan) has a commendable estimated fuel economy with 17 mpg (27km) in the city, 25 mpg (40km) on the highway and a combined score of 20 mpg (32km). Not bad for a vehicle that needs to be able to stay efficient while grabbing groceries or hitting the highway for a road trip, in equal measure. 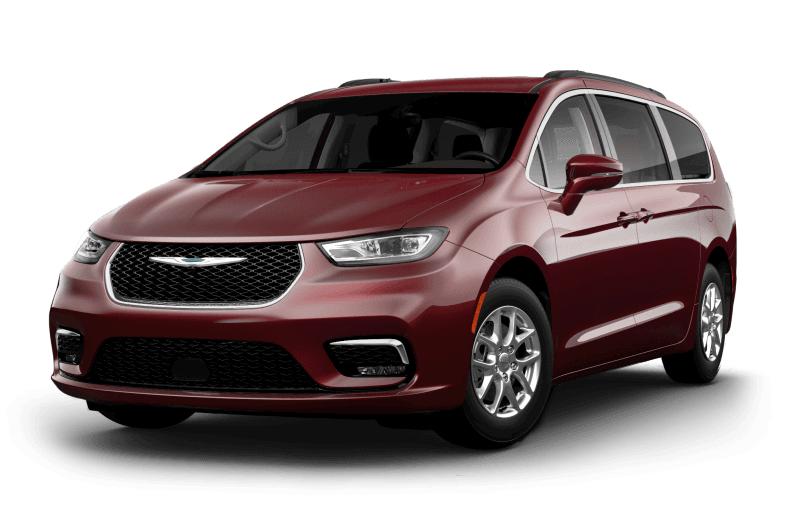 The 2021 Chrysler Pacifica takes top honours as a minivan that is no slouch in the fuel efficiency department. It’s a van that considers style, performance, luxury and fuel efficiency all at once and it’s no surprise given the extra attention to detail that Chrylser has put into it that the 2021 Pacifica gets a top marks EPA rating of 19 mpg (30km) in the city, 28 mpg (45km) on the highway and 22 mpg (35km) combined. The plug-in hybrid tops that with 30 mpg (48km) combined and an impressive 50km electric range that will allow for the average person to run all of the daily errands without touching the gas at all.

The 2021 Chrysler Pacifica is a hands-down winner in terms of fuel efficiency for a minivan and with the added hybrid feature, it can’t be beat.

Of the many considerations that come into play when purchasing a new vehicle, fuel economy is a heavily weighted one for most drivers. The truth is, it’s up to the individual to decide to what degree a fuel-efficient vehicle is pressing to their priorities. Some will value performance or style over fuel efficiency - and that’s just fine. The true value is determining what priorities will guide you in your purchasing decision. And you’re in luck because you’re not alone! A CarHub Product Advisor is always on hand to give you the rundown on whichever vehicle piques your fancy. And if it’s fuel efficiency that you’re after, our Product Advisors will be able to direct you to the most fuel-efficient vehicles on our lots.

You can make an appointment today to speak to a CarHub Product Advisor about the fuel efficiency of our vehicles and work with them to find the perfect fit for your driving needs today.